Polar Bears Get Lost in a Blizzard, Trading Tweets with @pghpenguins 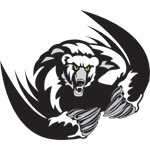 The Polar Bears gave a good fight last night against the Blizzard but ended up coming up short, losing 4-1. We played  a strong game, but, despite a lot of time in the offensive zone, we couldn’t get pucks into the net.

In reality, this score should be 2-1. Two of the Blizzard goals were scored by a player who shouldn’t be allowed to play in the division. He can skate circles around everyone in the division, including his teammates. He’d should, at a minimum, be playing the Boxers division (7B). More accurately, he should be up in Division 6 or 5. I don’t mind meeting him in 7, but he shouldn’t be in 8 where new players are getting their bearings. I’m surprised the Blizzard rostered him in D8 since I’ve long considered them to be one of the good citizens of Sky Rink, building strong, competitive but fair rosters. Since they know the skills of this player, it’s disappointing to see the Blizzard bring him into D8 and it’s disappointing that this player has allowed himself to play in the division as well.

I had a odd game last night. I believe only one goal was scored while I was on the ice (courtesy of the aforementioned ringer). However, it was certainly not my best game either. While I did some things right, there were too many instances of one of these things happening: 1) making a good choice only to execute it poorly or 2) making a bad choice and executing it. Luckily my defensive partners had my back last night and made up for the shortcomings. Still, I was dismayed how rough the game was for me. Hopefully it will be better next time.

There was a whole lot of hockey going on all over last night with the Detroit Red Wings and Pittsburgh Penguins in NHL matchups, Alabama Hockey in a showcase game and my own. I was paying attention to hockey from 7pm until around 12:30am. Around 6, I tweeted about the night’s games and, much to my surprise, ended up with a response from the Penguins. Check out this bit of Twitter history. 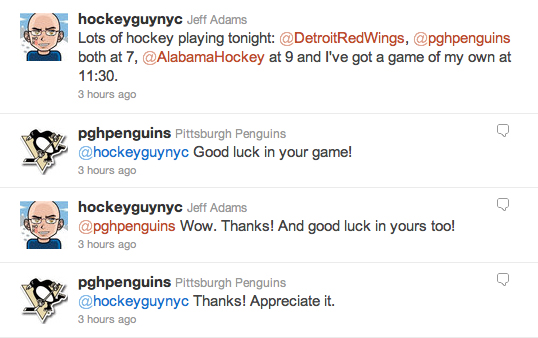 Sadly, both the Penguins and the Polar Bears lost last night. The Red Wings fared much better, chalking up a solid 5-2 victory against Dallas (making their fourth win in a row). I think Alabama Hockey won too…though I’m having a difficult time figuring it out from their tweets.

It was pretty awesome getting wished good luck by the Penguins though.