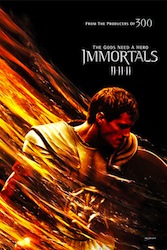 I admit…I resisted seeing Immortals for a number of weeks. The trailers made it look like a re-hash of 300, which I liked a lot. However, some decent reviews, including a B from Entertainment Weekly, and the ridiculously good looking Henry Cavill made me reconsider.

It was worth it too.

The movie was better than I expected. The story held together well. You’ve got the Gods, led by Zeus, trying to keep out of the affairs of the mortals–at least until the Titans are released from captivity. There’s also the evil King Hyperion who wants to release those Titans and kill off as many good people as possible along the way. The hero here is Theseus who is the one destined to make everything right.

The whole thing was a lot of fun. I liked the production design, which didn’t completely rip off the look of 300. It had its own color palette and style that, while borrowing from the earlier film, didn’t make me feel like I was watching the same thing. There were some other hotties as well, including Stephen Dorff (who is always a favorite) and Kellan Lutz (very happy I could see him without having to go to Braking Dawn). And it was fun to watch the not-sexy-at-all Mikey Rourke chew up scenery left and right as Hyperion.

Plus the 3D here was used well. The movie never seem too dark, or that I was viewing it through a hazy lens, and it did add some great depth to the scenery. It’s one of the few times I didn’t mind paying the 3D price.