Tea at Five with Charles Busch 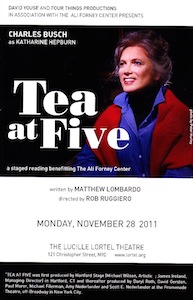 Last night we attended a benefit reading of Tea at Five starring Charles Busch. The play, written by Matthew Lombardo, is set in the parlor of Katherine Hepburn’s Fenwick estate. Here, Hepburn recounts the highs and lows of her life and career, including her brother’s suicide, her break into Broadway and the movies, her relationship with Spencer Tracy and more. The show was originally written for Kate Mulgrew and she performed it off-Broadway for a six month stint in 2003 (and she still periodically performs the piece around the country).

This reading was a benefit for the Ali Forney Center, an organization that works with homeless LGBT youth in NYC. Busch, who is a honorary board member, transformed himself into Hepburn for the occasion.

We’ve seen Busch in a number of shows that he’s written, including Die Mommie, Die and The Third Story, where he has also performed in drag. This is the second time we’ve seen him in someone else’s work (the first was last year’s Valley of the Dolls reading), and he was as outstanding as ever. He perfectly channeled Hepburn, as she was near the end of her career…and as I remember her from the era of On Golden Pond. There was no campiness or cuteness, simply a great performance from an actor portraying someone who, I’m sure, everyone in the audience knew of.

It was a great night of theatre, and I’m glad we also got to lend support to such a good cause too.