How to Succeed In Business Without Really Trying 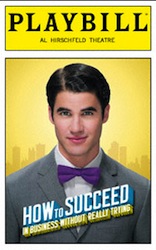 During the time that Daniel Radcliffe was in How to Succeed in Business Without Really Trying Will and I considered going many times and any number of things kept us from going. However, when word came that Darren Criss from Glee was coming into the show for three weeks we didn’t hesitate to order up tickets.

It was well worth the trip.

Criss looked like a natural in the role of  J. Pierrepont Finch, a young man who is eager to climb to the top of the business world. His voice is great and his character choices were perfect. He had a blend of enthusiasm, naiveté, cunning and charm. He rocked the choreography too, especially in the complicated finale of “Brotherhood of Man” as well as in the mailroom number “Company Way” and the football themed “Grand Old Ivy” (which featured dancers diving down a slide to make their exit through a hole in the stage).

Beau Bridges, who replaced Tony winner John Larroquette, was also delightful to see in the role of the president of World Wide Wickets. A major standout among the original cast members was Christopher J. Hanke as Bud Frump, the president’s nephew and someone who’s trying to stop Finch’s rise to the top. Frump was hysterically sneaky and coniving.

Director/choreographer Rob Ashford, who captured the 60s in 2010’s Promises Promises did it again with this show. The sets were in a 60s futuristic look. His choreography was fantastic as it was with Promises. His direction was also great as he kept the show moving at a good pace with some great comic timing.

I enjoyed this revival more than I did the 1995/96 version which had Matthew Broderick as Finch and Megan Mullally as the secretary he falls for. For some reason the show just didn’t stick with me, whereas I think this new production will.

Criss exits the show today after a limited 24 performance run (he does have to get back to work on Glee after all). Pop star Nick Jonas steps into the Finch role starting on January 24. Ugly Betty star Michael Urie also starts that day as Bud Frump. I’m not sure how Jonas will be in his role, but I have no doubt that Urie will be hysterical.