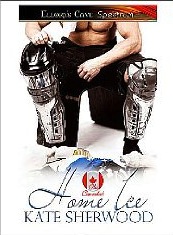 Kate Sherwood’s Home Ice was a good, fast read. The story centers on minor league hockey coach Jason whose closeted life is thrown for a loop when his first love, Mike, comes back to town. Jason and Mike were teammates and more, although the more was hidden from everyone else. Mike ended up in the NHL and Jason, thanks to a knee injury, moved into coaching in his home town. As the story opens, Mike is back in town, having retired, and his poised to become the GM for the team Jason coaches. It doesn’t take long for the two to rekindle their passion for each other.

There are two storylines in play here. Jason and Mike try to sort out their relationship and if they can be out, if they should be private or if they should be together at all. There is also a kid on Jason’s team who needs help with issues similar to what Jason is facing.

As I said at the beginning, this was a good story. I loved the scenes that detailed hockey practices and the ins and outs of minor league hockey. The scenes of Jason working with his troubled player were also good. My only issue is that the story was over too quick. The primary conflict is presented and resolved super fast. It would’ve also been nice to have more of a sense of how close Jason and Mike were before they went their separate ways. There’s a little of that, but more would’ve been better.

Perhaps there will be a sequel to this story and we can learn more about these great characters.