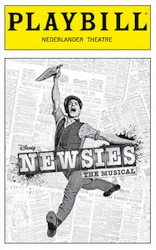 It  never crossed my mind as I watched Christian Bale sing and dance across a movie screen in Disney’s Newsies in April 1992 that I would end up watching it 20 years later live on a Broadway stage. After all, Newsies was a pretty giant flop for Disney and, even though its gained cult status, a musical is certainly a risky venture too.

It’s proven to be a worthwhile venture.

Originally designed as a musical they would have in its library to license out, the show was a huge audience and critical success when it debuted at the Paper Mill Playhouse last year. Disney decided to bring the success to Broadway for a limited run, which was to last until June but, due to demand, has already extended to August.

The story is the same as the movie, centered on the newsboy strike of 1899, which also addressed child labor throughout New York City. For the stage, multi-Tony Winner Harvey Fierstein has re-worked the book in an effort to make the story flow better. Honestly, the results here are mixed. I liked how more attention was paid to Jack and his struggle to decide if he was going to stay in the city or move out West. However, something about the structure of the story seems to make everything come across as a bit superficial.

Even with that, I absolutley loved the show for three reasons: The songs, the choreography and star Jeremy Jordan.

All the songs I liked from the movie are in it, and they’ve jettisoned some of the songs I didn’t care for (like “High Times, Hard Times”). There are, of course, new songs too, which are written by Alan Menken and Jack Feldman, they guys who wrote the original film score. Among the new songs I liked “Watch What Happens,” which focuses on the reporter writing the story of the birth of the newsies union, and “Something to Believe In,” which is the love duet between Jack and Katherine, the reporter. In the film, there were songs I’d speed over on DVD, but all the songs on the stage are worth listening to.

Christopher Gattelli put together amazing choreography. From the first leaps across the stage in “Carrying the Banner,” its clear that some great dancing is in store. My favorite here was “Seize the Day,” which featured some fun dancing on newspapers. Runner up to that was the big tap number for “King of New York.” In the ensemble of the show are three of my favorite So You Think You Can Dance alums: Evan Kasparzak from season five, Jess LeProtto from season eight and Alex Wong from seven. Evan and Jess have a great tap-off during “King of New York.” And it’s great watching Alex dance live, including doing one of his signature moves of holding his leg against his head just as he did in “Get Outta Your Mind” on SYTYCD.

And then there’s Jeremy Jordan. Buzz grew around him during the Paper Mill run of the show. It looked like he wasn’t going to do the Broadway run because after Paper Mill he went into the premiere of Frank Wildhorn’s Bonnie & Clyde. Luckily, Bonnie & Clyde died a quick death, freeing Jordan to rejoin Newsies in time for the start of previews earlier this month. He is absolutely fantastic in the lead role of Jack Kelly, playing it with far more charisma and power than Christian Bale did.

It’s great to see Newsies reborn and getting a wider audience than ever before. Disney will certainly have many schools clamoring to license the show (which, as noted, was always their intent), but now they’ve got a new Broadway hit on their hands. I wouldn’t be surprised to see the show extending its run beyond August. The audience at the show last night certainly liked what it saw. Critics will have their say tomorrow night as the show officially opens.

Here’s a look at the cast from their recent appearance on The View where they performed “Seize the Day” and “Santa Fe.”

Random trivia note: Newsies plays at the Nederlander, which was the home of Rent when it played on Broadway. Both shows feature a song called “Santa Fe,” and in both cases it’s about characters wanting to escape New York to go to the city out west.