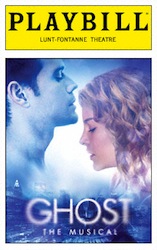 The thing that first struck me about Ghost: The Musical was the staging. That’s probably not what the creative team had in mind. But what caught my eye in the commercials and B-roll (which you can check out at the end of the post) was the overall design and movement.

What I didn’t expect was that the staging would occasionally be too cutesy or threaten to overshadow the story. An example of too cutesy is a moment early on when Sam and Molly are making out in their Brooklyn loft that the action on the stage fades out as projections across the stage show the two making out before the obligatory fade to black.  As for overwhelming, there are several numbers where the projections are going full tilt with an array of moving shapes and other things that make it difficult to focus on the human performers who are downstage.

That said, there are many instances of the staging making some really awesome moments. The first time Sam passes through a door is very well done. There are a couple sequences on a subway that are spectacular, both for the video projections and the actor’s movement in the train and in the station. The rain scenes are also very well done.

So how is the actual story? It’s Ghost, mostly exactly what you’ll remember from the film. There are a few tweaks here at there to put it on a stage, but it’s the same story. It’s not surprising since the book was written by Bruce Joel Rubin, who also wrote the movie. The music is okay. I liked the songs that Sam and Molly sang the best, followed closely by Oda Mae. The ones featuring Carl, the evil banker/friend, were the least engaging, partially because I couldn’t really hear the lyrics. I’m not sure if the actor wasn’t singing clearly or if the sound design is still begin tweaked (the show is still in previews as has about 10 days to go before opening night). My favorite song in the show was “Three Little Words,” sung by Sam and Molly in response to Sam’s inability to say “I Love You.”

The classic song from the film, “Unchained Melody” is present in several forms. At one point Sam and Molly are arguing and, as a way to say I’m sorry, Sam picks up his guitar and goes into a slightly goofy version of the song. Later, after Sam’s death, Molly hears the song on the radio (in what sounds like the Righteous Brothers version) and Sam sings along. Later, in the finale when Molly is able to see Sam for the last time, they reprise the song together.

Richard Fleeshman and Cassie Levy are wonderful as Sam and Molly. The two created these roles in the London production and their chemistry works so well from the moment the two walk into the Brooklyn apartment. You believe the depth of their love for each other. Their voices also meld together beautifully. Da’vine Joy Randolph makes her Broadway debut as psychic Oda Mae Brown and she does a great job with the role that Whoopi Goldberg made iconic in the film (you have to wonder that if the show runs long enough to have replacement casts if Whoopi will come in to play the role in a limited run). The other stand out was Tyler McGee as the very angry young man turned teacher–the Subway Ghost.

This looks like it will be a crowd hit. The audience was on their feet at the end of the show and all the comments overheard during intermission and post-show was that the show was good. While I’d like to see some adjustments in some parts, overall I had a great time too.