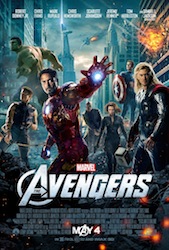 Joss Whedon is having an amazing spring. First came the smart, intriguing horror film The Cabin in the Woods. Now he’s rolled out the big-budget, smart, fun, superhero blockbuster The Avengers.

Marvel has been smart from the beginning in getting ready to unleash The Avengers, showing us the individual heroes. Iron Man, Thor and Captain America have all had their own movies (Hulk has too, but those were far less successful). We’ve also seen Nick Fury, Hawkeye and Black Widow making random appearances through the other films. So it all makes sense when everyone shows up to deal with Thor’s power crazed brother Loki.

Thankfully there’s not just Loki to deal with, first the Avengers have to figure out how to work with each other and that’s just as an engaging part of the story as the actual fight against the otherworldly threat. Whedon and Zak Penn developed a story that bristles with action and drama–so this is not just about blowing things up and heroes beating up on each other and the baddies. There’s a strong emotional core in this movie that works great.

I loved the entire movie, but I do have to call out Hulk for having the best scene, along with the best line, in one of his showdowns with Loki. It was a perfect moment.

It looks like 2013 will bring sequels for both Thor and Iron Man followed by a 2014 sequel for Captain America. Hopefully the Avengers will find good reason to get back together too (as long as the movie is as strong or stronger than this one).