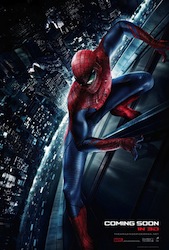 Hooray! Two movies in a week that both live up to my expectations and don’t make me feel bad about spending insane amounts of money to go to the multiplex.

The Amazing Spider-Man more than lived up to its title.

After getting burned out on the franchise with the lackluster Spider-Man 3 in 2007, the franchise has completely rebooted with this movie. In my opinion, this one outshines any of the Tobey Maguire installments, even the first one which was a really good movie.

There’s something about Andrew Garfield as Peter Parker/Spider-Man that works perfectly–the geeky outsider, the guy discovering his superpower and the responsibility that comes with them, the teenager falling in love. Garfield plays it so effortlessly. Plus his chemistry with Emma Stone, playing Gwen Stacey, is spectacular. It’s far more than Tobey and Kristin Dunst had in the first trilogy.

The action side of the film is jam packed too. We didn’t see the 3D version, but the 2D looked great. The flying around in Manhattan skyline looked more realistic than it did in the original movies, where it occasionally looked hyper-real. The story of the scientist gone wrong, which Spider-Man uses a lot was well done in this one and it looks like, based on the scene in the closing credits, will continue into the next movie.

It’s been a good summer for Marvel superheros and The Amazing Spider-Man keeps that going. I’m already looking forward to Garfield putting on the suit again.