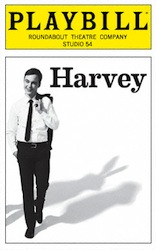 We nearly waited too long to see the limited engagement revival of Mary Chase’s 1944 Pulitzer Prize winning Harvey. I’m glad we got into the final performance last night since this was a wonderful comic, and yet heartfelt, performance from a tremendous cast.

The Big Bang Theory’s Jim Parsons led the cast as Elwood P. Dowd, the man who might, or might not, have a 6’3″ white rabbit named Harvey as his best friend. The hysterical Jessica Hecht was put upon sister Vera Louise. Charles Kimbrough, best known for his stint on Murphy Brown, played Dr. Chamley, the psychiatrist trying decide what to do about Elwood. And, in a wonderful featured role, Carol Kane, played Dr. Chamley’s ditzy wife.

The play takes place over an afternoon and evening in which Vera Louise decides she’s finally had enough of Elwood and Harvey and decides Elwood should be committed so Vera Louise and her daughter, Myrtle Mae, can have a “normal” life. After all, Elwood’s tendency to introduce Harvey to everyone is spoiling their social life and they can’t have that. It turns out committing him is easier said than done, especially since Harvey’s interactions make it hard to prove Elwood is crazy.

Everything about this production was spot on. Parsons makes an ideal Elwood. He’s got a natural ease about him that you don’t see with his uptight TV character. He’s also got pitch perfect comic timing. His scene with Kane was one of the funniest bits in the entire production. Hecht also stood out, especially some of her physical bits at the top of the second act.

While this is a comedy, there’s a feel good aspect here too. Harvey and Elwood seem to be out there to engage with people, to get to know them, bring them out of their shell. You see that a lot in act two with the staff at the sanitarium, a taxi driver and Elwood’s family. It’s really delightful… and something that we could use more of today.

A key line from the second act: “Well, for years I was smart. I recommend pleasant.”

If only there were a lot more pleasantness in the world!