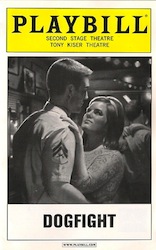 This afternoon we caught one of the final performances of the world premiere engagement of the musical Dogfight. The show features music and lyrics by Benj Pasek and Justin Paul and a book by Peter Duncan. It’s based on the 1991 River Phoenix/Lili Taylor film of the same name.

I’m glad we got to see this (as part of Second Stage Theatre’s regular season it only runs for a limited time) as it was wonderful.

The story revolves around three soon-to-be-shipped out Marines who are having one last night on the town in San Francisco on November 21, 1963. From the date you can tell two things–they’ll be headed to Vietnam and President Kennedy is assassinated the next day. On this night the friends play a game of “Dogfight.” The man who is judged to have the ugliest date wins the cash from the others who entered. Eddie Birdlace and his two buddies all intend to win, but Eddie takes a detour when he meets Rose and starts to fall for her. Even though he puts her through the humiliation of the dogfight, he makes amends and has a romantic final night.

The show takes a darker turn as Eddie, after being harassed by his friends, leaves Rose’s address behind and then endures the horrors of war. Among the atrocities, his two friends are killed in front of him and he’s injured. At the end of the show he comes back to rose who welcomes him home after so many people spurned him. 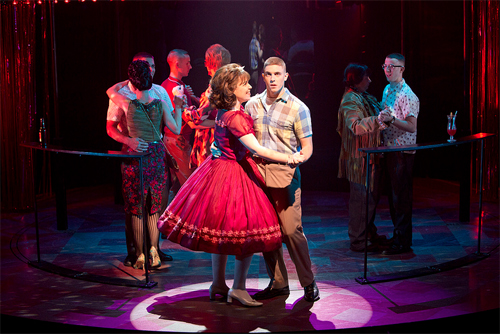 Pasek and Paul constructed a wonderful score…one that I hope is recorded because I’d definitely like to own it. The numbers the friends sing perfectly convey the hubris of young Marines who feel ready to take on the world. Rose has some breathtakingly gorgeous numbers as she navigates being asked on a date, finding out the truth and then being wooed by the boy. Eddie’s numbers run the gambit from projecting a tough persona to reflecting on the hurt that he’s caused. Most heartbreaking is his final song when he’s back home, before he finds Rose.

The entire ensemble is outstanding, but leads Derek Klena and Lindsay Mendez are perfection. Klena, who we saw earlier this year in Carrie, plays Eddie with a touching mix of a boy who is trying to transition to a man. It was amazing to watch him, within the matter of seconds, age up as the shattered solider who came home. Mendez is also tough, but vulnerable. She can stand up for herself, but she also wants to find love. Klena and Mendez had pitch perfect chemistry and you couldn’t help but root for them.