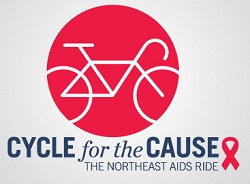 Hello from Danbury CT where Cycle for the Cause wrapped up an 84 mile very hilly ride today. Of that I did 64.8 miles. Today the 20 missed were all caboose detail related as I had no mechanical issue at all.

Caboosing continues to be an excellent adventure. As we refined the way it occurs it has been more efficient than yesterday. Since I’m usually bringing in the last rider as a rest stop is nearly or completely empty, the sweep vans started taking me at dropping me off at the last rider rather than me having to catch them. This lets me use my energy better so I don’t burn out at any given point. It also gives the crew a more accurate idea of where that last rider is since I don’t have to catch them, which at times yesterday was a challenge.

I did get up to the mic at dinner to dispel a couple myths about the caboose. First, to let them know that just because I was there didn’t mean they were about to get swept or that the route was closing right behind us (this has been true in year’s past). Second, they don’t have to apologize to me for going slow, walking their bike or stopping. Everyone is doing the best they can and exactly what they can do so I’m happy to let that play out.

Red dress day always was fabulous and some of those pics are up on Twitter and there will be more posted later. There was some great stuff out there today. I hung out behind a guy in a red tutu and fishnet stocking for a large chunk of the afternoon and I suspect we made an interesting duo to passers by with him in that and me in a Detroit Red Wings cycling jersey.

I also had a good time covering some miles with Adam and Adrian. We cranked out some speedy flats and some pretty speedy hills too… Plus had some good conversation along the way.

Poignant, touching moments for me today came when I’m iPod served up “Another Day” and “I’ll Cover You (reprise)” from the Rent cast recording. There emotional songs anyway but hearing them while doing the ride really drove their messages home even harder. And, yes, I wept a little while moving down the road.

Also, as a follow up on last nights mechanical discussion. Alex continues to be awesome. He got me a tire late in the day and has put it on this evening before dinner. I’m looking forward to riding tomorrow on it. The bike performed awesomely again and I was doing 18-19mph on some flats that had good pavement. I’m looking forward to seeing how it rides back on home turf next week.

Tomorrow we are set to ride into the Center at 2pm (closing ceremonies start at 1:30). It’s a 69 mole course tomorrow that looks pretty doable.

Remember, you can still donate as I’m still trying to hit $4,000. That donation link is http://ride12.kintera.org/jeffadams. Please give it a click and donate to support the valuable HIV/AIDS services provided by The Center. Thanks!