Bring it On: The Musical 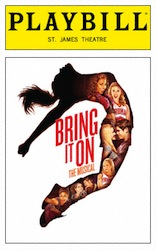 Back in 2000, Bring it On was a fun movie that had some nice social commentary in it. Now, Bring It On is a musical that is still funny, still has a message and has the added advantage of having some great music and choreography as well.

The show has an amazingly solid pedigree for a production that’s based on a movie property. Jeff Whitty, 2004 Tony Award winner for the book of Avenue Q, is responsible for the story. It’s not a carbon copy of any specific installment of the Bring it On film series, but it takes the themes and some of the characters from those movies and creates a story of its own. The music was co-written by Tom Kitt (2010 Tony Award and Pulitzer Prize winner for Next to Normal) and Lin-Manuel Miranda (2009 Tony Award winner for In The Heights). Miranda and Amanda Green co-wrote the lyrics.

These four have crafted a musical that’s fun, but also inspires with its messages of inclusion, being yourself and doing what you believe in. Over a post-show dinner Will did point out some issues in the story structure since the central conflict isn’t truly revealed until the end of the first act… in the moment though that didn’t phase me as I watched.

The story has some All About Eve meets Showgirls elements as a sophomore plots the take over of the cheerleading squad by getting the captain redistricted to another school. At the new school, the captain struggles to fit in and ultimately misleads the school’s dance crew into become a cheer squad so she can still make her way to nationals. Of course, she sees the error of her ways, grows and as individual and still manages to expose the sophomore for the plot she’d set in motion.

Director and choreographer Andy Blankenbuehler (a Tony winner for his In The Heights choreography) keeps the story moving at a great pace. He’s also created some stunning choreography. The straight forward dancing is energetic and puts the cast through their paces. The cheer sequences, which also had a two-time national cheerleading champion working on them, were extraordinary. The mix of dance and cheer moves was a blast to watch. I wish there’d been more, but I suppose  you can only do cheers stunts so many times in the span of a couple hours. There seemed to be missed opportunities as there was no full sequence of the dance squad learning cheer moves (except for the all important “cheer face”) and a very short sequence around the regional qualifying competition.

The young cast, many making Broadway debuts, was perfect. Taylor Louderman and Adrienne Warren as the cheer captain and crew captain were great as they learned how to be friends. Jason Gotay was spot on as the geeky guy who falls for the cheer captain. Ryann Redmond was the peppy friend who learned how to love herself and her body thanks to Nicolas Womack as a boy who falls in love with her. It was awesome to see SYTYCD all-star Neil Haskell as well playing a guy who was duped into falling for the wrong girl.

Huge props to the Bring it On team that decided to write a transgender character in the show. One of the primary members of the dance crew is La Cienega. It was great to see her stride on stage with no fanfare at all and for her to be a strong, confident presence through out the show. There were no apologies, no explanations and she does steal the show occasionally, especially when she’s kissed during the finale.

I’m glad we saw Bring it On while it plays it’s limited engagement (currently it’s set to close in mid-January). It was a great afternoon!

We’re headed into a stretch of show-going. As vacation begins this Wednesday we’re tying to catch a matinee of Evita (depending on the tkts availability). On October 27 we’re seeing the in-previews Scandalous: The Life and Trials of Aimee Semple McPherson (starring the awesome Carolee Carmello and written by Kathie Lee Gifford). November 4 we see the new Michael John LaChiusa musical Giant (based on the novel that was the basis for the James Dean movie). Just before Christmas we go to the star-studded revival of The Mystery of Edwin Drood with Chita Rivera, Stephanie J. Block, Will Chase, Gregg Edelman and Andy Karl.