Scandalous: The Life and Trials of Aimee Semple McPherson 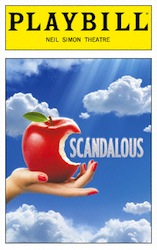 That’s the most important thing to say about Scandalous: The Life and Trials of Aimee Semple McPherson, a new musical that’s in previews on Broadway right now.

McPherson founded the Foursquare Church and became one of the first evangelists to use the media to preach. Her ministry also fed millions during the great depression, healed people and offered hope to many… including showing what a woman was capable of in an era when women were not in these sorts of positions. She also had a scandalous side as she had a multiple husbands, was allegedly kidnapped (or possibly shacked up with a married man). While McPherson died in 1944, her church and foundation continues today (the Foundation is one of the producers of the show).

Carmello plays McPherson and she delivers a tour-de-force performance. The show covers about two decades and Carmello plays McPherson from age 17 into her 30s. The show starts during McPherson’s 1927 trail for, among other things, conspiracy to commit acts injurious to public morals. Then it goes back to her teen years. Carmello changes her body language and her voice to portray this and the transformation is unlike anything I’ve seen on stage. I see multiple award nominations (and hopefully wins) for her performance in this role because it is extraordinary. 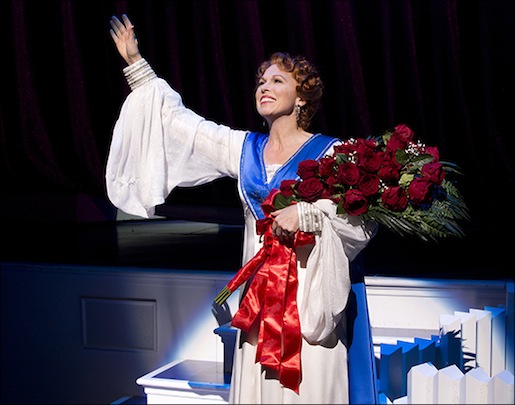 An interesting note for Scandalous is that this is a project Kathie Lee Gifford has been working on for years. She’s written the book, lyrics as well as some of the music for the show. She done a solid job. The book works pretty well to tell a story that spans a couple of decades. David Pomeranz and David Friedman handled writing the music and, as you would expect in a show about a preacher, there are some very rousing tunes.

The part of the show I had the most problem with was the set. When the church set is in place, it’s a large, white deco set that even covers the orchestra pit and extends out to the edge of the audience. I loved that the set extended to the edge of the audience. It was very appropriate for the church setting. The larger, on stage set had a couple problem for me. First, it looked like Superman’s Fortress of Solitude. Second, when the church wasn’t being used, it could only pull off to the sides and that forced the action in to the center area and often the stairs were used for anything else. It looked a bit clunky. 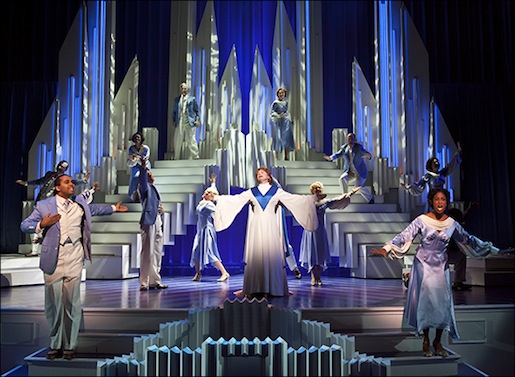 Scandalous is set to open November 15. The show, from my view yesterday, was in good shape and by the time they hit opening night it should be great. The show is fun, uplifting and Carmello’s performance should not be missed! Below is a video of Carmello performing one of the songs from the show in a concert setting, please give it a listen for a great sample of the show.