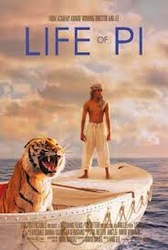 I’m not completely sure what I think of Ang Lee’s Life of Pi, which is based on the Yann Martel novel. I’ve read many times over the past few weeks that many filmmakers had tried, and abandoned, brining this story to the screen. While I haven’t read the book, I can understand from seeing the film that it’s a challenge.

I can say that I liked a lot of things about this film. It is gorgeous. The filmmaking is nothing short of extraordinary. The use of 3D is fantastic and really makes the film more than it might otherwise be. Director Lee embraces the technology and breaths life into the film. There’s also some stunning CG work creating the animals.

The story is where the movie fell a little short. It’s not a spoiler to discuss what’s seen in the trailers with a teenaged Indian boy enduring a shipwreck and sharing his lifeboat with a fierce tiger. The film is bookended with an adult Pi telling his story to a writer. The story fairly quickly gets the boy on the lifeboat and the adventure with the tiger begins.

The adventures of Pi and the Tiger are awesome. Surviving storms, figuring out how to eat, seeing the wonder of the ocean and all variety of other survival stories. These aspects of the movie I loved.

What I didn’t get so much was the spiritual aspect of the story. Pi embraces several religions, but that seems to get little more than lip service. Add to that, and here comes my potential * spoiler *, that there’s questions around whether or not the story actually happens and I ended up feeling a distance from the story rather than being swept away by it. That’s too bad since a movie that is this visually incredible should have the watcher completely under its spell rather than simple in awe of the craft and the individual vignettes.