Bare: The Musical – A Revisit 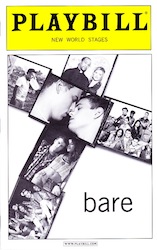 I knew I’d go back and see Bare: The Musical at some point, but I didn’t know it would be this soon. However, when I heard that choreographer Travis Wall was doing a talk back this past Thursday night I had to go. The show, which was already quite good when I saw it at the end of its first preview week, was tighter and even better just three days before its Sunday opening.

The cast and creatives did some good work over the 11 days between my viewings. A lot of it was subtle stuff with just the overall showing having been elevated to new levels as the cast has been performing in front of an audience. There were also some changes to scenes that I noticed. Two in particular caught my eye: 1) A scene in the locker room with the basketball team was shortened, which I think played better than the longer version. 2) In photography class the dialogue between Peter, Jason and Father Mike regarding Jason’s self portrait when from just funny to absolutely hysterical because of the use of Jason and Peter’s secret code word.

I’ve got to call out Jason Hite again. His portrayal of Jason had some amazing additional depth. You can tell he’s still exploring the character and he’s getting more and more better as time goes on. I hope he finds himself  honored for his work with the spring awards season begins.

Seeing it on Thursday also means I’ve now seen the locked show. Travis said during the talk back that the show was locked the day before so I’ve seen what will open on Sunday night. I expect to see some solid reviews for the show and I’m sure I’ll go yet again… though maybe in a few months rather than a few days. 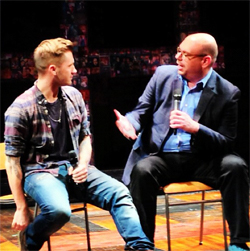 Meanwhile, after the show, Travis Wall chatted with the audience. It was great to hear him discuss Bare. He was approached by the producers who saw his work on So You Think You Can Dance and he was drawn to the project because he has a close connection to the character of Peter.

His work in the show has also morphed along the way. He indicated that there were probably 30 other versions of “Million Miles from Heaven,” the show’s opening number, because he was looking for it to be just right. I think he’ll be called out for awards come spring as well because there is some beautiful stuff in the show.

Possibly his most exciting news had nothing to do with Bare. He said that the dance company he formed with his friends, Shaping Sound, was going on tour in 2013 and that New York would be a stop in June! I’m looking forward to that and can’t wait to see what he and his talented friends put together for the tour.