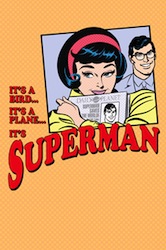 Nearly 40 years before Spiderman took flight at the Foxwoods Theatre, Superman had already become the first superhero musical. Back in 1966, the songwriting team that brought everyone the classic Bye Bye Birdie and the duo who would go on to write the screenplay for Christopher Reeve’s first two Superman movies, landed the hero on Broadway.

Superman’s Broadway adventure didn’t last long though. The show only ran about four months with only 19 previews and 129 performances.

This past weekend, City Center’s Encores revived the musical for seven concert performances, which allowed the throughly entertaining show to be seen again.

With comic-book styled buildings around the stage, the concert cast had full costumes and choreography. Superman took flight too, via a mechanism that allowed a cardboard cutout to move across the stage. It sounds cheesy in this era where Spiderman flies, but it worked perfectly for this show that had the comic book scenery.

This performance is the first time I’d seen or heard any part of this show, and I loved it. In the book you can see the foundation that David Newman and Robert Benton used in the Superman movies where Superman is a very wholesome guy who simply wants to do good. The songs fit right in with the overall Charles Strouse/Lee Adams song catalog, with the sounds of the late 60s music combined with a Broadway sound. The plot is a simple one, a mad scientist wants to destroy Superman… as does the Daily Planet gossip columnist. 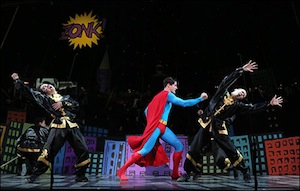 The cast assembled by Encores was outstanding. Edward Watts as Superman/Clark Kent was great in both roles. He had the “good” down perfectly. Jenny Powers as Lois Lane seemed to channel some of Margot Kidder’s Lois. David Pittu as the evil Dr. Abner Sedgwick was perfectly evil and tore up his signature song “Revenge.” Will Swenson appropriately chewed the scenery as columnist Max Mencken. The ensemble was great, especially the Flying Lings, who helped the mad doctor with his plan.

… Superman was a wonderful afternoon. I don’t think this Encores will make a Broadway transfer given that superheroes tend to be darker these days, but it was delightful to take in this super-treat.

The mission of the Encores series has always been to produce concert readings of forgotten or rarely revived musicals. Superman was hands down the most polished Encores show we’ve ever seen. Full orchestration with lights, costumes, set pieces and choreography just shy of a fully mounted Broadway production. In fact, if any regional theatre was interested in this material, using this staging would be a terrific place to start.

With the concert format and incredibly brief rehearsal schedule (usually just a week) it’s traditional, and often necessary, for the actors to carry their scripts and sheet music with them. With the exception of a few chorus members in the opening number, everyone was “off book” the entire show, which added to the polished feel I mentioned earlier. It’s a testament to the talent, hard work and professionalism of everyone involved that Superman was so much fun despite the time and budget constraints involved.

Is Superman great art? Not really. But it shouldn’t be written off as theatrical fluff. This show is incredibly charming and has a lot of heart. Two things sorely lacking in that other costumed crime-fighter show that’s currently on the boards.