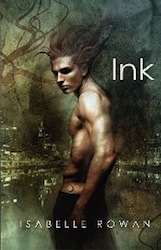 Dominic, a former Roman centurion, is smitten with tattoo artist Michael. Over the course of a few days, the two have a few encounters, including Dominic getting a tattoo from Michael. Even though Dominic compels Michael to forget him, Michael can’t quite forget. There’s a lingering something in his mind that leads him to finding the vampire.

Finding Dominic is just the beginning. Dominic doesn’t want Michael to go through the same trauma that he did when he became a vampire. Love wins out though and Michael convinces Dominic to turn him. That’s not the end of the story though because Dominic’s maker shows up and causes trouble as he shows Michael exactly how Dominic was after he was turned. Galen attempts to make Michael go through the same thing while Michael wants to prove he’s stronger than that.

Rowan created wonderful characters with Ink. Dominic’s transition from a lonely, lost soul to someone who discovers how to live again even though he’s a vampire was great. Michael, meanwhile, followed a different path as he discovered his soul mate and then undergoes the more-difficult-than-expected transition to vampire. Michael’s got an amazing blend of optimism and enthusiasm. Michael’s friends, and owners of the tattoo shop, Scott and Abby are great support for the newbie vampire and endure a lot for their friend. Galen is a sad character and that comes through vividly as he tries to break Michael and torment Dominic over the life he’s given to the younger man.

Ink put a wonderful spin on the vampire genre.