Not Much to Be Glee-ful About 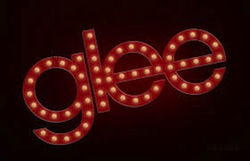 Season four of Glee came to an end Thursday night.

Sad thing is I’m not sure the recently announced season five and six are going to be worth my time.

I admit, there’s yet to be a perfect Glee season. The show has never been consistent with its story choices and writing. One week you can have a superb episode only to be followed by something that is poor. Most seasons have a few story arcs worth following–Quinn’s pregnancy, Kurt’s bullying and its aftermath, the constant battle to get to sectionals… regionals… and on to nationals, the courtship of Kurt’s father to Finn’s mom, will Rachel and Finn actually stay together, what kookiness will Brittany do next. Plus, even in bad episodes, you could count a batch of great musical numbers.

Season four has brought plots that are muddled and no overall arc to hold the season together. At times it’s been sketchy if the gang is actually preparing for regionals or not. There’s been a lot of derivative plot this season too–Rachel’s pregnancy scare and Blaine wanting to purpose to Kurt to name a couple. Some episodes don’t even seem to have a plot, merely some lose concept to hang songs off of.

The glut of characters hasn’t helped either. How many “sick” days did Joe, Sugar and even occasionally Tina, Brittany and Sam rack up? Most likely this happened because the producers didn’t want to pay the entire cast to show up for the episode. Did they really need all the new characters? Marley and Ryder never really did it for me. Jake was okay, but underused. It was great to see they added Unique as a regular, but she was mostly underused too even though there was such story potential there (which they explored for about 30 seconds when the parents came to school to discuss the issue of dressing as girl). Look at this ginormous cast photo, which doesn’t even have all of them. 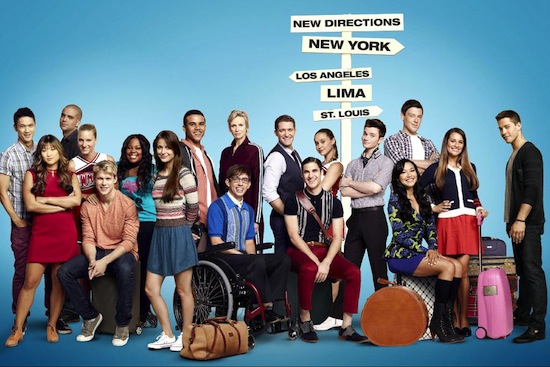 Oddly, the most interesting stuff of the season happened with the crew in New York. Rachel and Kurt had plot I was interested in. Although it also was mishandled. Kurt got into NYADA, only to turn around and go to Ohio for weeks (he stayed on well beyond his father getting a clean bill of health). Rachel had something going with hunky Brody, only to have him turn into a gigolo (?!?) and disappear. I admit, I do worry that if Rachel gets into Funny Girl that the Glee will end up being more like Smash (and we all know how Smash ended).

Most disappointing of the season is the drop in good musical numbers. Looking back across the season very few songs stand out–Kurt and Blaine singing “Come What May,” Emma ditching her wedding with “Getting Married Today,” Blaine’s “Don’t Stop Me Now,” Kurt’s NYADA auction of “Being Alive,” Rachel’s NYADA showcase numbers of “Being Good Isn’t Good Enough” and “O Holy Night,” the New York party smash up of “Let’s Have a Kiki” / “Turkey Lurkey Time,” and Quinn/Santana/Brittany on “Come See About Me.” The best song of the season by far happened way back in episode 4 when Blaine broke up with Kurt to a heartbreaking acoustic version of “Teenage Dream.” In seasons past, I’ve tended to buy at least three or four songs per episode. This season, however, I bought fewer than 30 out of the more than 100 songs available.

As I said earlier, I don’t hold out much hope for season 5. Glee broke their usual paradigm of a season equalling a school  year. As the season ended, they’ve only made through regionals. That means nationals and graduation for the current senior class (people like Artie, Blaine, Tina and Sam) will have to kick off next season. And what of Brittany? Early admittance to MIT… is she not back in season 5 or will the show have to splinter again to cover the goings on at another school? With the school year unfinished it seems difficult for them to be able to start fresh in the fall.

The best thing that could’ve happened in my mind is to move the show to NYC and figure out a way to get the original cast all living in New York. They already moved Santana. Artie is accepted to Brooklyn Film School. It wouldn’t be hard to get everyone else there and put them in college.

I will be back for season 5–at least the start of it to see if I can stand to watch. When the show is good, it’s very good. I’m hoping the writers and producers find a way to tip the balance back so that it’s more good than bad.