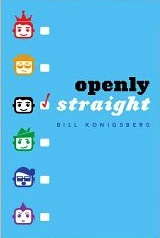 “Straight people don’t have to think, every time they talk, about whether they are coming out. We do. That might be hard, but that’s also why we have to come out. If we don’t, it’s pretty much impossible to have a conversation about anything beyond the weather without lying. We really have no choice, do we.” – Mickey in Openly Straight

Bill Konigsberg’s new novel Openly Straight has been on my radar for a few months now as a book to read this spring. It just published at the end of May and I devoured it in a little over a week after I received it. The book is simply outstanding.

This book’s focus is on labels and how labels can become all that we seem to be. Rafe Goldberg wants to get away from his label as “the gay guy” to the point he’s willing to transfer from his high school in Boulder to an all-boys boarding school outside Boston.

At first, Rafe’s plan works great. He falls in with a diverse group of guys as he joins the soccer team. He feels like he’s making some genuinely good friends along the way. His parents and best friend back home though don’t understand what he’s doing since he’d already had a successful and pretty stress free coming out a few years previously. As Rafe goes through his first semester though, he finds that hiding a part of himself, in the effort to not be labeled, has consequences he hadn’t counted on.

Bill, who I discovered with his debut novel, Out of the Pocket, in 2009, proved that it was worth the wait for this novel. He’s created such a strong character with Rafe. He’s also given Rafe two ways to express himself. Rafe tells the story as narrator. But an assignment from his writing teacher has him journaling. Through that, Rafe does some fascinating self-exploration that really opens his eyes, and the readers, to why he’s doing what he’s doing. The pacing is also spot on in this book, the tension ratchets up to the point that it felt like I was holding my breath during the last quarter of the book to see how Rafe was going to deal with the situations he created. All I’ll say on the ending is that was extremely satisfying.

Openly Straight is an amazing exploration of labels. The discussion in writing class where the meanings of “tolerate” and “acceptance” were examined was fascinating and should be something that everyone considers. I’m sure we’ll never get to a place as a society where we don’t feel the urge to label everything about everyone, but certainly how the labels are reacted to is something that needs to change. This novel could be the start of a great dialogue how how labels are dealt with–both for the labelers and the labeled.

I’m capping off this post with a personal look back to four years ago. In 2009, shortly after I wrote the review of Out of the Pocket on this site, Bill wrote this on his blog: “Keep an eye on Jeff. I am rooting for him as he moves through the writing/editing process, and not just because he liked the book; he is a genuinely nice guy whom I met at a reading a few weeks back in NY.” I’ve kept this in the back of my mind for years as I’ve moved through my process with Hat Trick (which was back then called Neutral Zone). It meant a lot to get this encouragement. Now as my first novel heads towards publication in September, and Bill has written a second one that is truly extraordinary, I hope the rooting turns out to be deserved.