So You Think You Can Dance opened with word of another injury this week as Curtis was down for the count as a result of a shoulder problem. Interestingly, the judges have continually given him a hard time about his shoulders. I wonder if his efforts to make them behave caused his injury???

It was another week of mess for the opening group number. I was stunned to learn that Sonya Tayeh and Dmitry Chaplin were responsible for that lackluster routine, which actually looked like it could be a reject from Goddess (the musical inside the movie Showgirls). The group numbers started on such a high note this season with “Puttin’ on the Ritz” that it’s disappointing what we’ve seen the past two weeks.

The problem of the top 14 group number did not carry over to the two small group numbers that closed the show. These turned out to be two of my top three for the night:

Jasmine, Alexis, Paul, Tucker, Fik-Shun, Aaron, Amy Contemporary choreographed by Bonnie Story: Making her SYTYCD debut, this choreographer of High School Musical went very serious and explored bullying in an emotionally charged routine where three of the dancers were the bullied and the other four were the bullies. Tucker, in particular, broke my heart as one of the bullied. 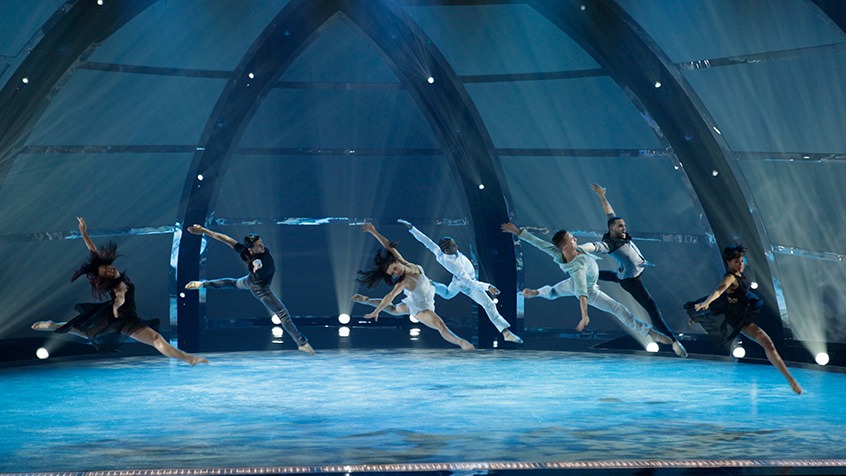 Alan, Makenzie, Hayley, Nico, Jenna, Malece Broadway choreographed by Spencer Liff: This was outstanding and made me think of the musical Contact, which also featured pool tables and cue sticks. It was slick and sexy. Spencer filled in for Curtis and it was a treat to watch him perform. 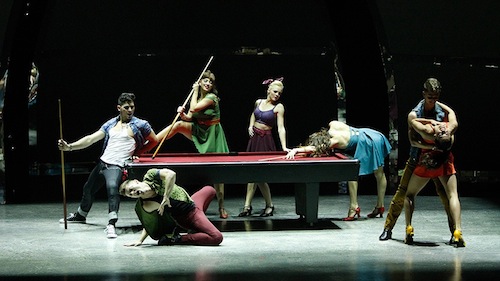 Fik-Shun & Amy Hip Hop choreographed by Christopher Scott: I do love these two and they keep doing numbers that land them in my top three. The was romantic and soulful and a perfect showcase for the chemistry between these two. Amy even carried on after one of the props misbehaved. It was completely delightful. 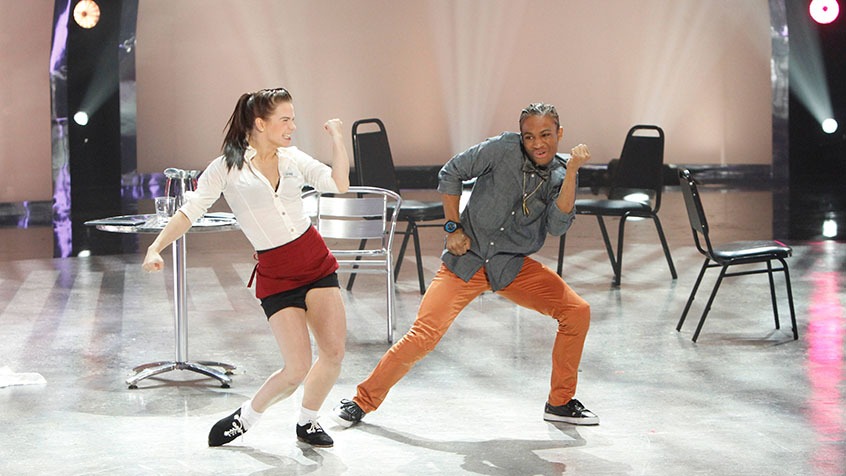 Here’s a look at the rest of the show, in the order of performances:

Tucker & Jenna Hip Hop choreographed by Luther Brown: These two had such good synch with each other, all of there moves were spot on. It may not have had as much swag as it should’ve, but it was a blast to watch.

Nico & Alexis Contemporary choreographed by Sonya Tayeh: Technically I enjoyed this very dark piece, but it didn’t fully connect with me. Alexis was so powerful in her character, and Nico didn’t have the same level. That unbalanced things for me.

Hayley with choreographer Leonardo Barrionuevo Argentine Tango choreographed by Miriam Larici and Leonardo Barrionuevo: Hayley  lucked out with Curtis’ injury (it’s awful to say that, but it’s true) as she got to do this with Leonardo. She rocked this number, nailing the intricate moves and looking so sultry while doing it. Curtis wouldn’t have been able to make her look that good.

Paul & Makenzie Jazz choreographed by Sonya Tayeh: This was not up to the expectations I have for Sonya’s choreography. Paul and Makenzie danced it very well, but overall I wanted something more from the dance itself.

Aaron & Jasmine Contemporary choreographed by Justin Giles: This was a very hip hop infused piece and I liked that a lot. However, to me this was Aaron and Jasmine’s first disappointment. They had good technical things going on, but the emotions and chemistry weren’t as strong as they usually are.

Alan & Malece Salsa choreographed by Jonathan Platero: Alan looked great performing mostly in his style (salsa isn’t his speciality, but you couldn’t tell that from this performance). The tricks were stunning, although they seemed to wear our Malece who, as the dance went on, looked like she was working.

Elimination: For the boys Alan, Nico and Curtis were in danger and for the girls it was Jasmine, Alexis and Makenzie. I can’t fathom how Jasmine ended up in the bottom because she’s been so ultra amazing. The rest of the lot made sense. Ultimately Alexis and Curtis were eliminated and I’m okay with those choices. Curtis has been struggling and while Alexis is good, there are girls who are better.