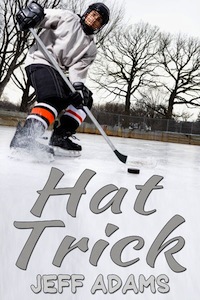 Over the six years that I worked on Hat Trick there are some key bits of music that either kept me moving on the project or worked their way into my thoughts about Simon and Alex, the main characters. Here’s a look at some of that music (each of the individual songs is linked to iTunes so you can hear a preview and even make a purchase)

[title of show]: I became aware of this show in 2008 as it was making its way to Broadway. It’s a show that, while small, is epic in its own way. Hunter Bell and Jeff Bowen wrote a musical that captured the trials and tribulations of anyone trying to do something creative. Three songs are touchstones to me:

1) “Die Vampire, Die” focuses on the things that can sabotage  completing creative endeavors — self-conciouness, self-doubt, despair and other things that attempt to take you away from the work. As they gang belts out towards the end of song, “you have a story to tell / pull you novel out of that sock drawer.” Hat Trick was never in a sock drawer, but I had plenty of vampires that had to be vanquished to get it finished. 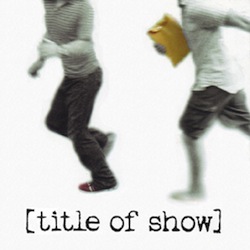 2) “A Way Back to Then” is not only a song I consider to be one of the best songs ever (not just among show tunes but of any song), it’s very inspirational for me. The story of doing finding the way to do what you love. I haven’t figured how to be a writer full time, but I am more than happy to devote the time that it takes to tell the stories I want to tell. It is, indeed, a “kick ass time.”

3) “Nine People’s Favorite Thing” is an important song now that Hat Trick is in reader’s hands. The gang says it’s more important to be “nine people’s favorite thing than one hundred people’s ninth favorite thing.” I can only hope that I’m lucky enough… to paraphrase the song… that those nine people will tell nine people and I’ll have eighteen people loving the book and then eighteen people could grow into five hundred, twenty–five thousand, six hundred people all loving my book. But the song’s lesson is clear, and if I can be nine people’s favorite thing that will be excellent. 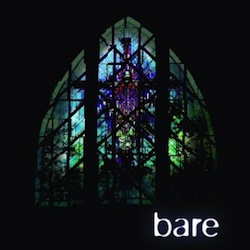 Bare: I’m not exactly sure when I first encountered Bare, but its first mention in my blog comes in June 2007. The musical, about two guys having a secret relationship in a Catholic boarding school caught my attention because the music was excellent. I never saw the original Bare: A Pop Opera, though I have the complete recording that was released in ’07. This past year I saw the revised Bare: The Musical. They’re both good, and basically the same plot with some variations on characters and songs. While the story in Bare is vastly different than Hat Trick (and by vastly I mean extremely vastly… and I won’t say more as I don’t want to spoil either the show or the book), if Simon and Alex sang to each other, they’d do it with the passion of Jason and Peter.

You hear the love from Jason and Peter in “Pilgrim’s Hands” as they essentially hide their own love behind a Romeo & Juliet rehearsal. There’s also the full out vocals in the title song, “Bare.” For Peter and Jason it marks an ending (okay, sorry, bit of a spoiler on Bare) but there are passages of that song that I can hear the Simon and Alex singing to each other at various places in Hat Trick: “I swear it was yesterday / I knew with a glance / That you were the question / And you were the answer / That the world would make sense again / If i held your hand.” And this: “I will always remmeber that first stolen moment / there you were kissing me / and time seem to freeze.”

Bare definitely influenced how SImon and Alex sounded in my head, especially how much they love each other… even when having that love is difficult. 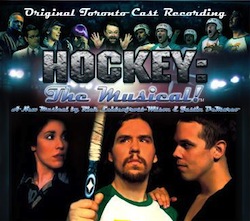 Hockey: The Musical: This is something that found me in 2008. At the time I was serving as the communications director for the New York City Gay Hockey Association. Rick Leidenfrost-Wilson, a co-writer of the musical, got in touch to see if the NYCGHA could help out with a fund raiser he was putting together to help get the musical off the ground. Sadly, I’ve not seen a full production of the show, but there are elements of the score that, like Bare, make up part of the voice of Hat Trick‘s characters.

Act one’s “Somehow” is a song that could easily be part of Simon’s internal dialogue. Granted, in Hockey The Musical, Pavel has a relationship with his father that’s a million times better than Simon does with his. Lyrics like “Just tell yourself it can’t happen / Just let it go and go on / Tomorrow you’ll see this can never be” are things Simon is often stuck saying to himself. Meanwhile, there’s a song the team depicted in Hat Trick with “You’re A Turtle,” which is the team’s ultimate acceptance of Pavel: “When the world brings you down / And they’re mocking your name / On the ice there’s just no fight in you / When the game seems so insane / Just remember who you are inside / Is something you should never hide / Just know that in your heart / you know what you are / You’re a Turtle.” Substitute Turtle for Flacon (of course things would have to be re-written to get the rhyme) and it would be perfect.

There’s another passage in “Somehow” that resonates with the You Can Play message that comes through in Hat Trick as well: “You can win it / just be in it / keep your head up / just don’t give up.”

By the way, if anyone wants to turn Hat Trick into a musical… I think that would be the most amazing thing ever! Drop me a line and we can talk about the musical rights!

You can learn more about Hat Trick at HatTrickNovel.com or pick up a copy at Queerteen Press (remember I’m donating $1 from each copy sold to You Can Play so it can further its mission.)