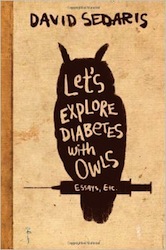 There are few books that can guarantee a funny and meaningful read like a collection of David Sedaris essays. His latest, Let’s Explore Diabetes with Owls, delivers on that.

There are more than 25 essays in this collection and I enjoyed them. Most of them, of course, dealt with Sedaris and his family and it’s those that were my favorites. Here’s a rundown of the essays I like the most:

Memory Laps: This details Sedaris’ attempts at swimming. He was on a swim team as a kid, and most of his ribbons were for good sportsmanship. His dad, however, focused on the best swimmer on the team, and that unexpected competition causes young David to act out and strive to achieve more in the pool.

Loggerheads: It’s common during childhood to captures bugs and other small creatures and attempt to keep them as pets. David and his friend Shaun ended up catching a sea turtles and trying to care for them. This essay covered a lot beyond the saga of the turtles, including David’s father trying to get him to a football game and the death of Shaun’s father. This one was the best combination of funny and poignant.

Easy, Tiger: Sedaris travels a lot and this commentary on learning languages is great.

Standing Still: This is meaningful in today’s economy where so many young people are just eeking out an existence. Sedaris recounts when he was 23, working in a restaurant and living with one of his sisters, who ended up being attacked by a man on her way home one night.

Author, Author: Here Sedaris recounts his time on book tours. I laughed out loud a couple times with this story, especially the way he’d sometimes offer priority seating to some fans.

Standing By: This was a timely one for me to read since I was traveling most of the time while I was reading this book. This is all about the craziness that happens when people travel, especially when that travel goes wrong.

Day In, Day Out: I found this fascinating as Sedaris writes about how he keeps a diary, including what happens when a guy he’s dating reads the diary and the trauma caused by having a laptop stolen that has diary entries on it that weren’t backed up.

I hope Sedaris has some great stuff in his diary for his next book as they are always a welcome addition to my reading list.