Pitch by Will Parkinson 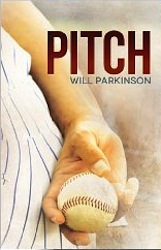 Pitch, a new YA novel from Will Parkinson, is a good entry into the genre. It’s packed with some great characters and a lot of story. The book covers a couple years in the high school life of Taylor Andrews. He’s got a huge crush on the new kid in school, Jackson Kern. It’s a crush that shows no signs of fading away.

Taylor speaks endlessly of his crush to his best friend, Benny. These two are a great pair. Always there for each other and always working to keep each other on the right track. It doesn’t always work, of course. But the interactions between these two are among the book’s strongest moments. Everyone should have a friendship like these two have.

With a two year timespan, there’s a lot of stories that make up the backdrop of Taylor’s crush. The summer that Taylor and Benny spend as counselors at a camp for abused kids was a good sequence. I wished there’d been more threads of this through the book because the story of them working with Addy was wonderful. I’d love to see Addy get his own book because he starts quite a transformation that you only get peeks of as Pitch progresses.

A lot of time, of course, is spent talking about Jackson. He is a star baseball player at school. He also becomes student body president and does a lot of great things during his tenure. Taylor is along for all of it, even as his crush is unrequited. Jackson is a great guy and a strong role model in many ways. The reader gets to know him well by the end of the book. What I like most about him is that for as great as his public persona is, he knows there’s still a little scared kid inside that he has to deal with.

Then there’s Kevin. Kevin is in to Taylor… to an extreme. With Taylor having only eyes for Jackson, however, Kevin’s affections are not returned. While the blurb of the book states that Kevin retaliates for this, the scope of retaliation was surprising and caught me off guard.

The moral of this story would be “talk to each other!” Many of the issues in the book would be solved if the characters were more open with each other. That can be an important trait to learn for young and old alike because it can save so much drama and grief.