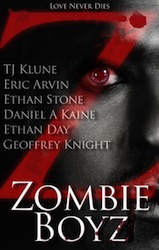 I do enjoy the zombie apocalypse, even if it does tend to stress me out a bit, although I tend to watch it (Walking Dead, World War Z, Warm Bodies, Night of the Living Dead) than read it. The Wilde City Zombie Boyz anthology, written by three sets of great writers–Geoffrey Knight & Ethan Day, Ethan Stone & Daniel A. Kaine and TJ Klune & Eric Arvin–puts some gay romance into the zombie genre to great effect. (Note: As of December 18, the three stories are also available as seperate purchases.) Warning: There is some spoiler material below.

Guessing Who’s Coming At Dinner by Geoffrey Knight & Ethan Day: This was a super fun story, even if it was set in the apocalypse. Unknowingly, college freshman Chandler has served the burgers that start the zombie infestation while he’s working at Beefcake Bob’s. The fatal burgers went to members of his former high school’s football team, a car full of guys who often taunt him. However, one of the guy’s, Zane, defends him from the taunts… which is good because Zane is a major crush for Chandler. As the apocalypse unfolds, Chandler deals with his whacky family, who seem intent on living as normal as possible during the disaster, as well as going on an adventure to rescue Zane. The rescue allows a wonderful love to develop.

Surviving in Sin City by Ethan Stone & Daniel A. Kaine: Craziness breaks lose in Las Vegas as the zombies start to run rampant in the city. Cooper, a Londoner looking to escape a bad breakup, is in Vegas and quickly realizes he needs to get out and back home, where he has all the supplies on hand to deal with the hordes. In Vegas he’s got to improvise because he’s got nothing with him. Kaleb is a Vegas native and watches the beginning of the epidemic begin on the streets. Soon enough these Cooper and Kaleb are fighting for their lives to get away from Vegas, but they still find time to fall for each other too.

Of the three stories, this is the more straight forward zombie story in the anthology. There’s a lot of zombie killing action and moments where you wonder how the heroes will survive or not. The love story between Cooper and Kaleb is fun to watch unfold as these two alpha males figure out how to come together, not only to fight but to allow themselves to love the other. The story goes back-and-forth in POV between Cooper and Kaleb and its the perfect way to let the reader in on their feelings about both the apocalypse and the growing romance.

Ghoul’s Gym by TJ Klune & Eric Arvin: Uly and Jake are opposites who are in love. Uly is a body builder who works at the gay workout haven of Art of Man. Jake has a more run of the mill job and is on the fit, but thin side. One the morning of the apocalypse, the couple has a huge fight. Uly goes into work, which turns out to be one of the places where the outbreak first happens. Jake, on the other hand, decides he needs some roids so he can bulk up and be the man he thinks Uly needs him to be. Jake ends up at the wrong dealer and finds himself turning into one of the undead.

This story makes use of the flip-flopping POV to great effect. Reading how Jake’s thoughts change as he becomes more zombie is intriguing. It’s his thoughts of Uly, and need to find Uly that is very romantic as he’s sure Uly can fix this. Meanwhile, trapped inside the gym, Uly and a band of fighters do their best to stay alive against pumped zombie intent on ripping the living apart. This story had an unexpected, and moving ending, which took this story into a dimension that made this story stand out from the other two.

Zombie Boys was a great anthology with three very different stories. Whether you pick up the anthology or the individual stories, you’ll be in for some great zombie/romance reading.