Simon & Alex and the GLI Come Together

Twas the Friday before Christmas and I was researching a post I needed to do for PuckBuddys.com to preview the Detroit Red Wings-hosted NHL Winter Classic. In looking at all that was part of the Classic and the accompanying Hockeytown Winter Festival, I saw that the Great Lakes Invitational was moving from Joe Lewis Arena out to Comerica Park.

That triggered the brain storm. 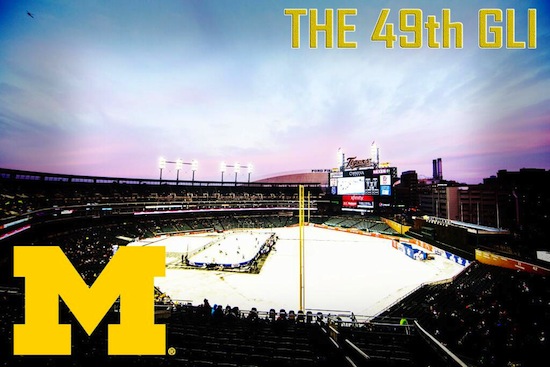 That was the seed of what, over the following week, would become Hat Trick Overtime: A Classic Winter’s Night. The free short story, which you can read in its entirety by clicking on the link, takes place six months after Hat Trick‘s epilogue and immediately following last night’s University of Michigan/Western Michigan GLI game.

I’ve never done a story this fast before and I had a great time doing it. I wrote the first draft last Saturday and Sunday, leaving some flexibility since I didn’t know if the Wolverines would win or lose. Monday I did the first edit. Tuesday through Thursday, I continued polishing the story while beta readers (thanks Elvis, Michael and Connor!) provided feedback. Yesterday, Will read it over and gave it a thumbs up (yay! his opinion is always important), along with some minor editing suggestions.

This morning I finished it off by adding in details of the actual game. I have to admit that I wrote the draft from the perspective that the Wolverines would win. Sadly, they lost in overtime, so that had to be captured.

I couldn’t make the trip to Detroit for the Red Wings/Toronto Winter Classic game or the Hockeytown Winter Festival events, but I’m glad I could send Simon and Alex. I hope you enjoy their trip as much as I did.