Traveling Light by Lloyd A. Meeker 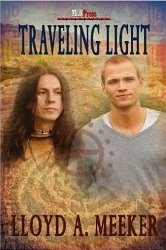 I discovered Traveling Light by Lloyd A. Meeker almost by accident. Will and I met Lloyd this past October at GayRomLit in Atlanta over lunch on the first day of the event. We talked about his books and I was fascinated by this one in particular. Jump forward to December, and Will snagged this for me in a website giveaway. It’s unlike anything I’ve read before.

Ian is a hospice nurse who’s training to become a shaman. He’s got a boyfriends who’s a little bit afraid of him because he doesn’t understand what that means. His family doesn’t understand him all that well and would rather not hear about it. He does amazing work for his hospice clients, one who is very bitter as he nears the end of his life and another that is at peace with the idea of death but wants to choose her own exit point.

Ian is close to the end of his training, but he’s directed by his mentor to attempt to make peace with his family. At the start of that visit, however, Ian and his older brother get into an argument on the way home from the airport and, at a convenience store stop, his brother is murdered during a robbery. Returning to his mentor, Ian is obsessed with finding, and bringing justice to, the killer. Of course, this troubles Ian’s mentor, and clouds his path towards becoming a full shaman.

At the same time, there’s Ta-Kuat, a traveling from a different time/place, who meets Ian while he’s on a quest of his own. The two end up on a complex joint-journey as well, leaving Ian to once again to make decisions that can impact both his life and Ta-Kuat’s.

If it sounds like a lot of story, it is, and Lloyd pulls it all together beautifully. Ian’s story was so beautifully complex. He wants desperately to do the right thing and bring peace to people, and yet there’s so much turmoil for him because of his family situation, and ultimately because of how he becomes intertwined with Ta-Kuat. The story carried visceral reactions for me, as Ian struggled with trying to keep to his path as shaman-in-training while battling the anger and desire for revenge that he felt.

Ian’s journey was fascinating. I’ve never read a book that had a shaman as it’s lead character and I learned a lot about that way of life. I have no idea how much of the book is realistic in terms of the training they go through or about what their travels are like (I need to discuss this with Lloyd about this at some point), but the book was a truly beautiful read.

I’ll definitely be looking to read more from Lloyd. His storytelling style was very enjoyable and if this is any indication of the books he’ll be writing in the future I know I’m going to enjoy them. Maybe there’ll be more about Ian and his journeys at some point too!