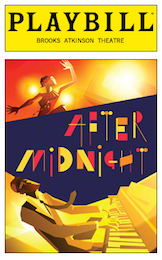 It’s pure coincidence that we saw two club-style shows in two weeks. After Midnight has been on our radar since it opened in November, but it’s guest star Vanessa Williams that made us step up and buy a ticket. This musical revue goes back to the era of The Cotton Club and the big band songs of Duke Ellington to make a high energy 90 minutes of our fun.

Across those minutes you get 28 numbers that combine excellent singing and dancing. Dulé Hill, best known for his TV work in Psych and The West Wing, comes back to his musical roots as the host for the evening. Hill got his start as Savion Glover’s understudy in The Tap Dance Kid and later played in Bring in ‘da Noise, Bring in ‘da Funk. He’s still got moves and he shows them a few times during the performance, especially in the show’s finale “Freeze and Melt”

Vanessa Williams, who headlines four songs and also appears in the finale, was wonderful. Her take on “Stormy Weather” was perfection. She then showed off a super fun side on “Zaz Zuh Zaz.” As you can see in the picture below, she also kick up her heels a bit in the “Freeze and Melt” sequence. It was a delight to see her on stage again (we haven’t seen her since 2010’s Sondheim on Sondheim revue). 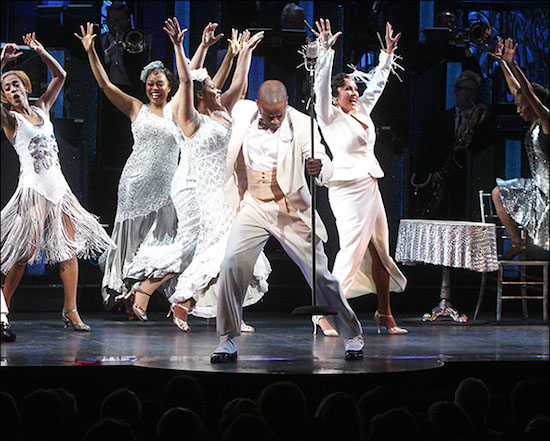 While all of After Midnight is excellent, there were some performers and songs that stood out. Julius “iGlide” Chisolm and Virgil “Lil’ O” Gadson have two amazing dances together that essentially amounted to a dance-off. Gadson also works to woo a woman, and his methods of wooing involved some very humorous choreography. Jared Grimes did some amazing tap work in Tap Mathematician and “It Don’t Mean a Thing.” Adriane Lenox delivered two outstanding comedic songs. I don’t know the name of the song, or who performed it, but there was a number around the half way point that was just music and a singer, but no words. It was sublime and I wish I could credit it better.

Speaking of music, the orchestra was incredible. The Jazz at Lincoln Center All Stars, under artistic director Wynton Marsalis, rocked the house!

Here’s the show’s video reel. In the video, the role of the guest star is played by Fantasia, who originated the role (and returns to it once Vanessa ends her run on May 11). You’ll get just a small taste of who wonderful the show is.