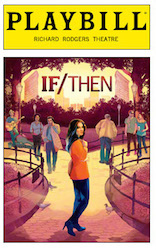 If/Then was set up to be a show that I’d find extraordinary. Seven principal actors that I love. Book, music and lyrics from the Next to Normal guys. Direction from the guy who did Rent, the Signature revival of Angels in America, off-Broadway’s Giant and so many others that I like.

What saved the show was the actors. Idina Menzel, in her first role on Broadway since Wicked, sings and acts for all she’s worth to give life to Elizabeth. Anthony Rapp is delightful as her friend Lucas, and he really shines in his moments with Jason Tam, who plays boyfriend David. LaChanze and Jenn Colella are great comic relief as lesbian couple Kate and Anne. Jerry Dixon is good, though doesn’t have quite enough to do, as a city planner who weaves in and out of Elizabeth’s life.

Where the show goes wrong is its overall premise. The show explores what happens as a result of the choices you make. Within the first few minutes, Elizabeth meets up with two friends in Madison Square Park just as she’s arrived back in NYC after a decade away. In one timeline, she goes with Lucas to meet some housing activists. In the other, she stays in the park to listen to a guitar player with Kate. Go with Lucas, her name becomes the more conservative Beth. Stay with Kate, she’s the more freewheeling Liz.

From there the show goes back and forth between Liz and Beth. Sometimes the scenes go on for a minute or so, sometimes they’re longer. I doubt Menzel was a character for more than five minutes at a time. It’s confusing. There’s subtle lighting queues that you have to catch on to, or you listen for what name is used or how she’s interacting with the other characters.

The major problem with the setup is that it’s impossible to engage too much with Liz or Beth because as soon as you buy in to what’s happening, the scene shifts to the other timeline. Will and I even had different take aways on the ending (that’s how confusing it was). I thought both timelines simply continued. Will said only the Beth timeline continued. He had good reason for thinking this, so maybe he’s right.

The show had an official running time of two hours, thirty five minutes with a fifteen minute intermission. It felt longer than that. I suspect if it wasn’t for the excellent performances of Menzel, Rapp, LaChanze and the rest, I would’ve been good with leaving at intermission.

I can see why If/Then received only two Tony nominations–one for Menzel (who is great as always) and for Tom Kitt and Brian Yorkey for the score (there are some solid songs sung really well).

It wasn’t a completely wasted afternoon, but it was a disappointmnet.