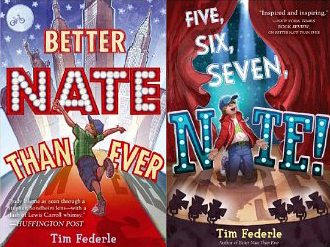 I’m glad I read Tim Federle’s Better Nate Than Ever and Five, Six, Seven, Nate! back to back than having to read the first and then waiting for the second so that I didn’t have to wait to see what happened.

These books are an absolute delight and appealed to the theatre geek in me. They also give a great look at a young teen figuring out who he is.

It’s hard to talk about these without giving too much away (which would really diminish the fun), so here’s just a bit about each book.

In Better Nate Than Ever, which is a finalist for this year’s Lambda Literary Award for LGBT Children’s/Young Adult Literature, we meet Nate. He’s obsessed with musicals. He performs them often with his best friend Libby. He’s got a jock brother he can’t stand. His parent’s seem almost ambivalent to him. But he’s got a dream… and a plan. He’s sneaking (yes, sneaking!) off to New York City to audition for E.T. The Musical. It’s quite a trek with a bus ride, navigating New York and giving an auction that gets him a callback! Unfortunately, that callback means he’s missing his bus home. Oops.

In Five, Six, Seven, Nate!, Nate is back in New York in the ensemble of E.T. Nate getting through the rehearsal process and up to the first preview is awesome. It feels hyper real as he deals with his fellow cast mates, children and adults and ends up in the understudy role of E.T. So, not only is he navigating his own issues of being a 14-year-old, he’s also rehearsing a musical that’s under a ton of scrutiny because it is E.T.

I loved Nate. Federle does a great job of making him real. With it’s first person narrative, you not only get what he says, but what he wants to say. His internal dialogue about what’s happening around him is perfect. Coolest of all is Nate growing up in the two books as his perceptions change about himself, Libby, his parents, and other people around him.

I have to give shout out to one of the things I loved best about the book. It’s small, but I laughed every time it came up. Flopped musicals as curse words! “Frickin’ Carrie!” “Holy Dance of the Vampires, no!” “We’re officially Flora, the Red Menace-d.”

The one think I missed in book two was Aunt Heidi’s roommate, known only as Freckles. He had such great interactions with Nate in Better Nate… it was a little sad when he wasn’t around in book two (he got a show out of town).

I hope Federle goes for a third book. There’s a lot more ground that can be covered with Nate and I know I’d read it.