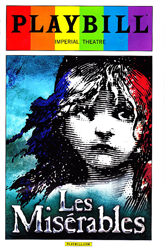 I’ve seen Les Miserables on stage a number of times, starting from the late 80s when I saw it on tour in Birmingham, Alabama. The epic show has always been a favorite. Last night I saw it for the first time in more than a decade because I couldn’t pass up the chance to see the acclaimed Broadway revival now playing at the Imperial Theatre.

Gone in this production is the famous turntable as well as some of the largeness the original staging had. In it’s place are background that are based on Victor Hugo paintings, some impressive set pieces and a more gritty feel. In fact, the whole show feels more gritty, dirty and full of struggle than the original. That feel is one of the few things the movie did well and it seems to have found its way into this staging. It’s a subtle, but powerful adjustment.

The same grit found its way into the orchestrations and vocalizations as well. The show doesn’t go to the extreme the film did, but there’s even more emotion flowing from everyone’s vocals since some of the show tune sheen has been stripped away. Yes, the soaring notes are still there, it’s just that there’s more oomph behind them.

The amazing find in this show is Ramin Karimloo as Jean Valjean. I never saw Colm Wilkinson do the role in person, but I’ve heard him on recordings and seen TV performances. The same for Gary Morris who won acclaim as one of the Broadway replacements and is captured on the symphonic recording. Karimloo’s take on the role is extraordinary and lifts him into the same realm as these the other two. Here’s a sample of him, singing on Katie. It’s outstanding (my mom would’ve loved this and my thoughts drifted to her as this was performed last night…it was one of her very favorite songs and I still remember when she discovered it when Gary Morris sang it on The Tonight Show).

The rest of the cast is also top notch. Will Swenson as Javert showed such range as he grew from the simple constable into a man consumed with vengeance who can’t comprehend the kindness he’s shown. Nikki M. James, a Tony winner for Book of Mormon, was heartbreaking as spurned Eponine. Her “On My Own” was crushingly beautiful. Andy Mientus, from NBC’s Smash and making his Broadway debut here, also had such character growth from the naive student to the injured adult. His vocal shift from his first big number with “ABC Cafe” to “Empty Chairs at Empty Tables” was perfection. Caissie Levy as Fantine gave a beautiful “I Dreamed A Dream” as well as a haunting “Finale.”

The new staging had some moments that top the original. Much of it is more subtle now. Instead of a huge moment for the barricades arrival on stage, it’s more ominous as it quietly arrives behind Eponine as she finishes singing “On My Own.” She turns to find it, regards it for a moment and then walks to it as the new scene begins. It was a breathtaking moment.

Eponine’s death is now because she saves Marius from being shot (I don’t remember it being that way originally) and makes “A Little Fall of Rain” all the more heart wrenching. Gavroche’s death a few minutes later is restaged in a way that is more a gut punch than the original (one audience member a couple seats down from me gave an audible gasp). Valjean and Marius’ escape into the tunnels was stage magic, using the projection system that was in place. Truly the centerpiece for the night was Javert’s suicide, somehow the bridge breaks away and he plummets into a swirling pool. It was an amazing piece of drama and stage craft.

The show is nominated for three Tony Awards this Sunday–Best Revival, Best Actor for Karimloo and Best Sound Design of a Musical. I’m surprised it didn’t pick up some additional ones for scenic and lighting designs as well as orchestrations and for some of it’s other principal cast including Swenson’s Javert, Mientus’ Marius and James’ Eponine.

I was sad to hear that there isn’t a plan to record this cast. I know there are a few dozen recordings of this show, but this cast with the new orchestrations deserves to be preserved. Hopefully whoever’s in charge of recordings will change their mind on this.