Bullets Over Broadway: The Musical 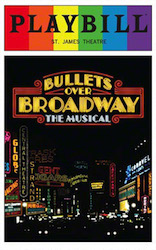 Sunday we headed to Bullets Over Broadway: The Musical a stage musical adaptation of the Woody Allen film. I admit I haven’t seen the movie. What drew me to seeing the musical was that it starred Marin Mazzie and featured choreography by Susan Stroman, who also directed.

The musical, as with the film, tells the story of a playwright getting mixed up with the mob to get his play produced. The mobster producer wants his talentless girlfriend in the show, and the other actors are a mix of eccentrics.

Unfortunately, the show, especially the first act, didn’t quite gel for me. Even though the show’s been open more than two months, it felt like it was still in previews waiting to be tightened and fine tuned. Sometimes the musical  numbers also felt like they were in competition with the story–was this a book musical or musical revue?

There were some great individual things going on though. As expected, Marin Mazzie was awesome as the Helen Sinclair. She struck me as a combination of Norma Desmond and Helen Lawson. Mazzie knows how to play the comedy and her voice was exquisite on standards like “They Go Wild, Simply Wild, Over Me,” “There’s A Broken Heart for Every Light on Broadway” and “I Ain’t Gonna Play No Second Fiddle.” I wish she’d had more to sing.

Nick Cordero, who was Tony Nominated for Bullets, was a standout as mobster Cheech. He’s assigned to watch over the boss’ girl, but ends up helping to re-write the show and turning into a masterpiece. His songs were good, especially “Tain’t Nobody’s Biz-ness if I Do.” That was the centerpiece of the show as it turned into a mobster tap number. There’s a reason that number was chosen as Bullets showcase on the Tony telecast. It’s shows off Stroman’s choreography the best and it’s showstopping. 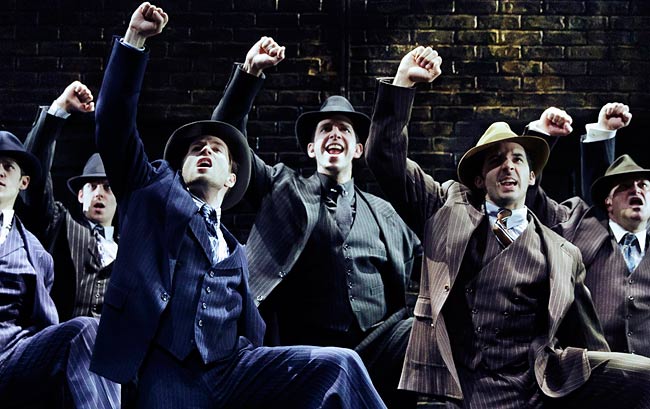 Karen Zimba, a long time Broadway favorite, made the most of her small role, and did get to deliver a great version of “There’s a New Day Comin’,” but she was underutilized. Zack Braff, making his Broadway debut, was solid in the role of the playwright. Betsy Wolfe was also underused as the playwrights girlfriend.

There are a lot of good components to this show, I wish there was a better end product to go with it. It was a good afternoon at the theatre, but it was not great.