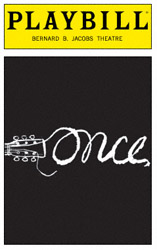 My connection to Once is a little odd. I’ve never seen the 2006 film, which included the Academy Award winning song “Falling Slowly.” I have, however, had the movie soundtrack in heavy rotation on my iPod since summer 2007 because the acoustic music is hauntingly beautiful. I’ve been interested in seeing the stage version since it began previews in spring 2012. Not only was there the music, but the show used some interesting movement during some of the musical numbers.

For some reason, though, I didn’t make it to the show until yesterday afternoon. I was determined to see it before leaving the city this week. I’m glad I did because the show is even better than I expected it to be. I’ve never seen anything like it before how it mixes story with music and movement to create a delicate yet powerful experience.

The story boils down to Guy, Girl and music. Girl hears guy singing his songs about his girl whose left Dublin and went to NYC. Guy finds new inspiration in Girl to sing the songs, and record them. Girl has issues of her own though with a husband who isn’t in Dublin with her and their daughter. It’s complicated, but simple at the same time. Watching Girl and Guy make their connection, and start to make music together was sublime. So much of the show is quiet as Guy and Girl talk about their pasts, music and what the future might be, and then it’s punctuated by bursts of music and movement. 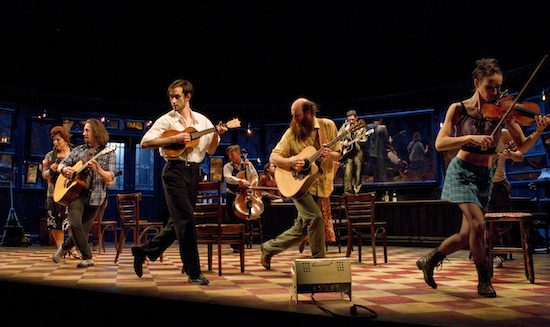 Anyone whose read this blog routinely knows I’m a sucker for dance. Once, however, doesn’t have a choreographer. Steven Hoggett is credited for “movement” and that is an accurate word for it. As the actor/musicians play, their movement around the stage is breathtaking, adding even more to the power of the music. You see it captured in still life above, but you can see it in action in the video at the end of the post too. Seeing it in person blew me away, rather than catching it in a televised performance.

Paul Alexander Nolan, pictured below, is the current Guy in the show. He was outstanding. His voice captured the emotions of the songs perfectly. Jessie Fisher joined the cast as Girl just a couple weeks ago and she’s already clicking perfectly with Nolan. Fisher finds the right balance between the forceful, to get Guy to pursue his music, and the quiet as she tries to figure out if the should be together or not. 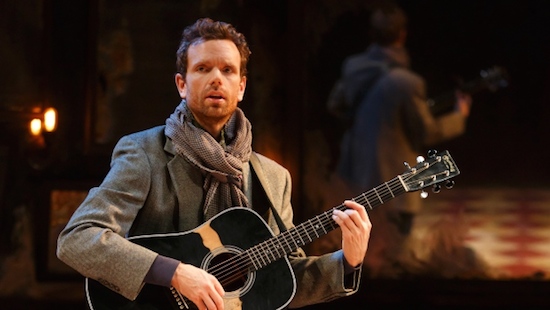 The entire package was excellent. I was surprised, however, that the show doesn’t use all the music from the film. There’s four songs on the film soundtrack, including the title song, that aren’t used in the show. It didn’t take away from the show, to be sure, but it would’ve been cool to see those songs get the stage treatment as well.

Also to note, the show actually starts as soon as the theatre opens. The onstage bar is open for drinks before the show and intermission. Before the show starts, the cast members (including Guy) are onstage singing, dancing and interacting with audience members. It’s a great, energetic way to start the show.

I highly recommend seeing this sublime show either in NYC or out on tour.