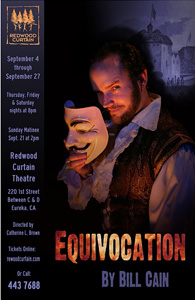 Equivocation, the current show running at Redwood Curtain, is nothing short of extraordinary. The smart script, which is alternately funny, dramatic and touching, could easily be set in modern times.

It’s Shakespearean. It’s 1605 and Shagspere is commissioned to write the true history of the Gunpowder Plot. Except the king requests that there’s witches in it, and Shag can’t mention key people. It’s not an easy play to write either since the plot wasn’t actually carried out, it means it’s a play about something that didn’t happen. Shag and his troupe are stymied, and it almost splits them up. Shag ends up playing investigator to find out what really happened since the pieces don’t quite add up. That almost sends him to jail. What Shag ultimately produces is a stunning play that tells a story, satisfies the king and even brings him closer to his daughter.

It wouldn’t be too much of a leap to hear about this kind of real-world media manipulation today. It also wouldn’t be a leap to see a similar plot on Scandal or House of Cards.

Beyond the excellent script by Bill Cain (who, not surprisingly, wrote an episode of House of Cards), the six actors delivery stunning performances.

David Hamilton as Shag runs such a range of emotion through the piece as he struggles with writing the play and dealing with the conflicting information he receives, along with the brutality he witnesses as his sources are dispatched. Plus he has to wrangle the company of actors who don’t want to go against the king, but also don’t want to do a bad play. He also navigates tough scenes with his daughter who doesn’t much like plays and is also dealing with the death of her twin brother.

Cody Miranda does an amazing turn as actor Sharpe, the characters Sharpe plays, plus playing King James. This occasionally has Miranda playing scenes with himself and he does a tremendous job and making clear character distinctions. James Hitchcock has similar duties as actor Nate (along with Nate’s characters) and lackey to the King, Cecil. Cecil was particularly riveting because there’s such a creepy, evil vibe coming off the character and Hitchcock nails that. Of the array of characters Gary Sommers embodied during the show, the Jesuit priest was the best. The priests passionate talk of equivocation during a court room scene was breathtaking. Dmitry Tokarsky’s Armin had the job of trying to keep the troupe together and did so convincingly. Ambar Cuevas had some touching scenes talking about theatre and her family. Her final scene, which closes the show, was incredibly touching. 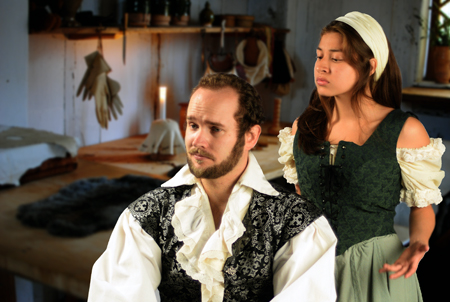 Equivocation boasts amazing technical production as well. The scenic design by Ray Gutierrez, along with the scenic painting by Gutierrez and Tom Roscoe, are beautiful. It’s particularly sad to know that the stunning painting that serves as the set background will disappear once the show closes. There are also some great fight scenes from fight choreographer Craig Benson (I loved, loved, loved, the second act sword fight). Director Catherine L. Brown wrapped the whole package together to create a fantastic evening of theatre.

This is our second Redwood Curtain show since we’ve been back in Humboldt and it was outstanding. It’s great to see such thought provoking work produced here. The show runs two more weekends, closing September 27. Tickets are available at RedwoodCurtain.com