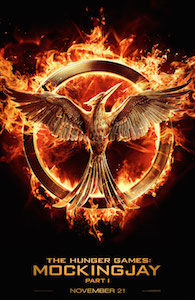 I was dubious when they announced that Mockingjay was going to split into two films. The book is not as long as the seventh Harry Potter and it also wasn’t my favorite book of the trilogy. The third book to me felt rushed and also suffered from Katniss seeming far more passive than she had in the previous two books. The film, however, cured some of the problems.

Be advised, I’m going to make no effort to steer away from spoilers, mostly because I want to discuss the differences I noticed between book and movie. So, proceed at your own risk if you haven’t seen the movie and/or read the book. I’m not even sure I’ve caught all the differenced as it’s been just about three years since I read the book. Many of these differences helped to make Mockingjay better in movie format than book.

Katniss doesn’t have time to wallow: Yes, she’s still upset with what’s happening and that’s clear. But she’s pushed into action a lot faster. Plus, I think Jennifer Lawrence plays Katniss so well that the character doesn’t have the one dimensionality that could’ve plagued her in this film.

Yay Effie!: Effie is in District 13. As I recall, Katniss had Cinna’s assistants with her in 13 to help do her propaganda. For the film Effie’s here and that’s awesome. Elizabeth Banks is wonderful in this character and it was great to see her here.

Why not more Finnick?: As I recall, he played more of a role in the books, being at Katniss side in the films. He did have a great distraction moment during the raid to get Peeta out, but he seems downplayed here (even though there’s mention of a new trident for him). Knowing his fate in the book, makes me wonder if they’ve got something different planned for him in part two of the film, or if it’s just in part two that he gets more screen time. (Plus, Finnick is hot…and simply needs more screen time.)

Onscreen raid: I liked seeing the raid to get Peeta, and that Katniss saw it too. In the book, again as I recall, it was a mention that it happened and suddenly Peeta was back.

Changed demands: One of the demands Katniss makes to President Coin to be the Mockingjay is that she gets to kill President Snow. She did not make that demand. Does this mean a different ending for the film, or did they just not want her to say those words at that moment for the film?

I was very pleased with the film, and it exceeded my expectations. The major annoyance now is waiting until November 2015 for the final installment. These moves were shot at the same time. There’s no reason we should have to wait a full year. Harry Potter did a Thanksgiving / Summer split for Deathly Hallows. Mockingjay should’ve followed that same pattern. Of course, that doesn’t mean I won’t be queued up at the theatre to see it November 22, 2015.