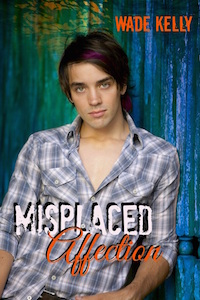 I love a book that takes me on an emotional roller coaster ride and Wade Kelly’s Misplaced Affection does just that.

Before I go on, a bit of disclosure, Wade’s a good friend and I got to read this book during its editing phase. Wade was also a guest yesterday on Jeff Adams Writes talking about the release of this book. None of that, however, matters since this is an awesome book that I’d recommend whether or not I knew Wade.

The book start off with a prologue that takes places at the wedding of Zach and Gwendolyn. Zach is Flynn’s best friend. Flynn and Zach talk about nearly everything and have been friends for years, a friendship that only got closer when Flynn’s mom and older brother were killed in an accident. The friendship, however, got tweaked a long the way because the boys shared a kiss one night.

Moving past the prologue, we go back nearly four years to the start of Flynn’s junior year and watch him start a relationship with Keith. These two are adorable together as they figure out what’s going on between them. A key sticking point is that Flynn won’t come out because he’s scared of what Zach and his super religious family will think of him. Flynn doesn’t want to risk the friendship. The fights Flynn and Keith have over this are painful and you wish Flynn would just talk to Zach, but he doesn’t leaving both himself and Keith in distress. The wedding between Zach and Gwendolyn, however, is a tipping point that forces everything to the surface, far more than Flynn, Zach or Keith could’ve imagined.

It’s impossible to say more than that because there are so many twists and turns in this book that I do not want to give away. The book covers not only Flynn’s complicated relationships, but also looks at child abuse, reconnecting with a distant parent, how damaging religion can sometimes be, the importance of friendship, how what-ifs can mess up a life when dwelled on and that love can conquer all.

I first discovered how powerfully Wade creates characters with Names Can Never Hurt Me. She does an even better job with this book. Flynn, Zach and Keith, who each get a turn narrating a section of the book, are drawn in vivid detail, each with a distinct personality that makes you like them and, at times, what to shake them so they wake up. It’s not just these main characters that Kelly pays attention too, Keith parents are wonderful, Flynn’s dad has an amazing story arc of his own and Zach’s parents, well, saying they have issues is an understatement.

The story’s multiple threads all wrap up nicely at the end and make for an extremely satisfying read. I love a book that creates an emotional journey and this one does–I went back and forth between being delighted, angry, sad and back again. I hope this book finds a wide audience and ends up on people’s 2015 “best of” lists in twelve months. It’ll certainly be on mine.