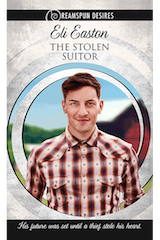 Book three in the Dreamspun Desires series was a total delight. The Stolen Suitor by Eli Easton captured me earlier on and didn’t let me go until the end.

What starts as a scheme by a down-on-their-luck family to take over a ranch turns into two wonderful romances. Mabe Crassen sets her sons to work on a plan. Eric, her oldest, is supposed to woo the ranch widow to divert her attentions away from Chris Ramsey. Meanwhile, Jeremy, Eric’s younger brother, is supposed to attract Chris’ attention. Neither son is convinced the plan will work, or that they should even try, but they end up going for it.

Shy Jeremy is adorable working up the courage to flirt with Chris while Chris has decisions to make on if he’s going to firmly be out or try to do what’s expected of him and marry a woman. Eric, on the other hand, really comes into his own as a series of events leads him down a path he wasn’t expecting. The brothers’ stories are great and while Jeremy’s is the primary since this is an m/m romance I enjoyed getting a good dose of Eric’s story as he essentially found his way.

I loved how Eli wove everything together into a cohesive story. I admit I was a little skittish about how the whole scheme would play out, but it was a truly great happily ever after for everyone. Kudos to Eli for creating such an engaging bunch of characters. I’d love to see more from Clyde’s Corner, Montana in the future.