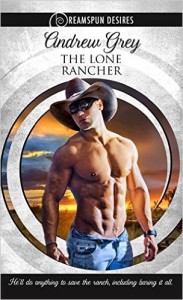 Andrew Grey’s The Lone Rancher was a fun read. I liked the idea of this guy working to save his parent’s ranch by dancing at a strip club. It was an interesting twist on a “saving the <insert business here>” story.

Aubrey’s been working at the job for months to help pay off his parents’ debts and is looking forward to the day he can stop and just work the ranch. Meanwhile, he’s hoping no one finds out that he’s stripping, or that he’s gay. But when his best friend Garrett shows up at the strip club, Aubrey’s world gets turned upside down. How had he never know Garrett was gay? And what if Garrett recognized him?

Aubrey’s got a lot of juggling to do, especially once he and Garrett come out to each other and start a relationship. These guy’s are adorable as they figure out their relationship while trying to hide from their parents and the small town they live in. Their alone moments, when they’re talking, getting to know this new aspect about each other and trying to plan a future are where the book really shines. Aubrey’s time in the club is also fun and ended up making me think of the 80s movie A Night in Heaven.

Dreamspun #4 is yet another enjoyable read in the series.