Book Review: “Symptoms of Being Human” by Jeff Garvin 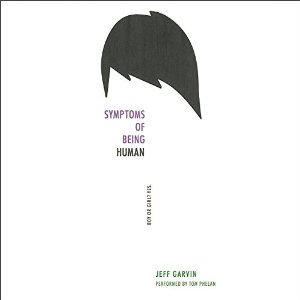 I give this book at least a million stars.

Symptoms of Being Human by Jeff Garvin was a book I didn’t know I wanted to read, but I’m completely glad I found it. I came across it in a Barnes & Noble, was fascinated by the cover and picked it up. The first sentences of the blurb pulled me in: “Riley Cavanaugh is many things: Punk rock. Snarky. Rebellious. And gender fluid. Some days Riley identifies as a boy, and others as a girl.”

I’m sure there are other young adult novels featuring gender fluid main characters (at least I hope there are), but this is the first I’ve seen. Garvin, a debut novelist, nails every aspect of this book.

Riley jumps off the page with very strong characterization. Has we meet Riley, they are starting at a new school after a hospitalization stint, which has also landed them with a therapist. Riley is a ball of nerves and Garvin makes the reader feel that so intensely. Going to school. Being stared at. Getting bullied. Maybe making friends–but it’s hard to tell for sure sometimes. Dealing with their parents–and just to make it more complicated, Dad is running for public office. None of this is easy for Riley because every situation is fraught with potential trouble.

I’m going to leave any attempt at plot with just the above. I loved going into this with no preconceptions. Everyone, however, should read this book. Gender fluid isn’t something that’s discussed often in any forum and this is an amazing look at what it might be like for young gender fluid people. It’s also a sharply focused look at teenagers–it’s not just gender fluid teens that go through Riley’s experiences. All the teens in the book have so many similarities in what they must deal with. It’s rather heartbreaking to see these things so up close.

On the other hand, as difficult as parts of this book are, Riley has many moments of joy as they discover who they can be and perhaps should be while embracing their gender identity instead of trying to hide it.

I can’t speak highly enough about this novel. I “read” the audio version and I have to give kudos to  Tom Phelan who voiced Riley, and the other characters, brilliantly. In particular Tom’s take on Riley pulled me through the myriad of emotions from laughter to anger to tears.

Put this book on your TBR immediately and get ready for a read that will inspire in so many ways.