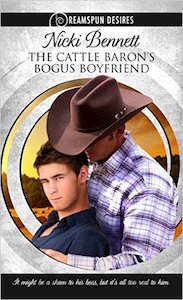 After a few books away from the Dreamspun Desires series, it was time to return to them to get a fix of category romance. Nicki Bennett’s The Cattle Baron’s Bogus Boyfriend not only has a super fun title, but was a super fun read too.

Jonah Hollis has it bad for his boss, a millionaire cattle rancher. What he doesn’t know is that Lincoln Courtwright might have a thing for his administrative assistant too. When Linc breaks up with his girlfriend just before the big Cattle Baron’s Ball, he asks Jonah to be his date. However, a scheming family member has other ideas and drives a huge wedge between Jonah and Linc.

I love Jonah and the band of friends he lives with (Wes, Sammy and Aidan). Jonah’s back and forth about what to do about the crush he carries was cute to read, especially as it heated up. I don’t usually like it when conflict happens because characters don’t talk to each other, but in this case Bennett makes it work so it’s believable. And, frankly, it leads to a great resolution in this case because it also includes Jonah’s parents, who I both liked for vastly different reasons.

Linc is great too. Once his bisexuality is revealed it’s just what is. I appreciated there was no back and forth about his attraction of girls versus guys. He’s bi and that’s that–and it’s Jonah he’s got his sights on. The slow build between these two as they went from boss/assistant to something closer to friends and on to lovers played out just like I like it–slow and steady which just makes the pay off all the more sweet.

I hope there can be a return trip to the Broken Spoke ranch, not only to catch up with Jonah and Linc, but to get the scoop on Wes and Ford. There’s a story waiting to be told there!