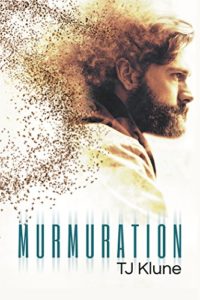 Murmuration by TJ Klune is extraordinary and one of the best books I’ve read in 2016.

This is a book that I can’t talk too much about, however, because I don’t want to run the risk of giving any spoilers. Anyone who reads this should go into it knowing as little as possible.

For those who don’t know, here’s the books’ blurb:

In the small mountain town of Amorea, it’s stretching toward autumn of 1954. The memories of a world at war are fading in the face of a prosperous future. Doors are left unlocked at night, and neighbors are always there to give each other a helping hand.

Amorea is the best little town there is.

The only good Commie is a dead Commie.

The Women’s Club of Amorea runs the town with an immaculately gloved fist.

And bookstore owner Mike Frazier loves that boy down at the diner, Sean Mellgard. Why they haven’t gotten their acts together is anybody’s guess. It may be the world’s longest courtship, but no one can deny the way they look at each other.

Slow and steady wins the race, or so they say.

But something’s wrong with Mike. He hears voices in his house late at night. There are shadows crawling along the walls and great clouds of birds overhead that only he can see.

Something’s happening in Amorea. And Mike will do whatever he can to keep the man he loves.

Here’s what I can say:

That’s really all I’m comfortable saying in terms of specifics. If  you read Murmuration, I encourage you to be measured about what you say when you’re done. Like Harry Potter books or movies like Sixth Sense or The Crying Game, people deserve to read this without spoilers. As difficult as that may be, don’t ruin it for your fellow readers.

Lastly, thanks TJ for releasing such an amazing, wonderfully romantic read.