Book Reviews: “The Thing I Didn’t Know I Didn’t Know” & “Barefoot in the City of Broken Dreams” by Brent Hartinger 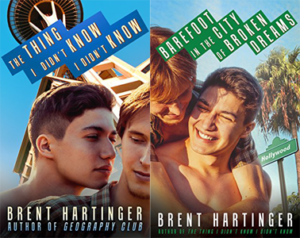 It was wonderful getting back into the world of Russel Middlebrook after so much time away. I originally met Russel back in 2004 when he was introduced in The Geography Club, Brent Hartinger’s incredible young adult book which spawned a series with four more books plus a film. (It was also one of the inspirations for me to write the original installment in the Hat Trick series.)

In 2014, Russel made the jump into new adult books with The Thing I Didn’t Know I Didn’t Know and I’ve had that book on my Kindle for a while and I was finally spurred to read it, along with it’s sequel Barefoot in the City of Broken Dreams.

Russel’s now a college graduate and trying to figure out what he’s supposed to do. In Thing I Didn’t Know he’s living on a houseboat in Seattle with his friends Min and Gunnar. Russel’s drifting with his two jobs–lifeguard and being a baker at a custom bread place, but he feels aimless. He also feels like his friends have their act together as Min’s in grad school and Gunnar has made a small fortune by selling an app, which lets him pursue whatever obsession he wants.

Granted, I’m 20+ years older than Russel, but I liked the book because of how it captured how anyone, regardless of age, can feel adrift in life, whether it’s career, relationships or anything else. Hartinger infuses Russel with such a strong voice. Some may call it whiny, but I found him realistic. One of the centerpieces to the story is Russel befriending an older woman he saves as part of his life guard job. She’s a former screenwriter, so he finds someone who loves movies like he does and she’s a great influence on him. Reuniting with his high school boyfriend, Kevin, also throws some interesting turmoil into his life, which he also learns a great deal from.

This was a delightful book to bring us up to date with Russel and where he is in life.

Broken Dreams moves Russel and Kevin to L.A. so Russel can go after his dream to be a screenwriter. Min and Gunnar stayed in Seattle, but in this book we get to catch up with Otto, another one of Russel’s high school friends. Otto’s in L.A., pursuing an acting career. Otto’s storyline has always been a highlight of the Russel books and I loved seeing how he’s doing in adulthood. Russel’s journey in this book resonated for me because it was one of the creative and that always works for me these days. I’m not a screenwriter, but as an author I related to his struggles and insecurities.

More than anything, watching Kevin and Russel navigate Russel going for success was a great element in the book. Kevin tries to be supportive even while he sees what’s happening. The ease in which they both say completely the wrong thing makes for good tension. With the book in Russel’s point of view, you get his thoughts as he’s saying the wrong things but he’s not able to stop himself.

I’m moving directly into book three of this series, The Road to Amazing, so I’ll be ready for book four when its released in early 2017.

NOTE: I received a free ebook of Barefoot in the City of Broken Dreams for an honest review for Jeff & Will’s Big Gay Fiction Podcast. The Thing I Didn’t Know I Didn’t Know was purchased.