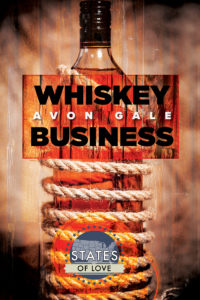 In the past few months I’ve become a fan of Avon Gale because of her Scoring Chances series, which focus on romance between hockey players. Given my love of those books, it was an easy choice to pick up Whiskey Business, her latest novel (which also happens to be part of Dreamspinner Press’ States of Love series.

In this Kentucky-set story, Ryder Waites is trying to save his family’s whiskey distillery by selling it to a large conglomerate. Hanged Man bourbon is popular, but more work is needed to make it turn a profit, and by extension keep the town of Gallows Grove afloat.

Ryder sold the business, but what he didn’t expect was someone from corporate headquarters to come out and inspect everything to make the decision on if Hanged Man would continue to be produced in Gallows Grove or if production would move to HQ.

From the beginning he doesn’t like the stuffed shirt who arrives. Adam Keller didn’t necessarily want to make the trip either, but it was a chance to get away from his ultra conservative family and  business life for a bit.

It was a delight to watch the sparks fly between Ryder and Adam–initially they were sparks of dislike but soon enough it turned to passion. Adam leads a closeted live in Lexington so that just adds to the tension. Can the business stay put? Can Adam and Ryder form a long distance relationship? Can Adam get out of the closet?

Gale has done an amazing job of creating Gallows Grove, a fictional town in a real Kentucky county. The towns folk are wonderful and look out for Ryder because they know he’s trying to do right by the town. The town itself, however, is almost a character itself as it’s filled with business with pun names (I’m not spoiling any of those here–you can either read the book or listen to Avon’s podcast interview where she gives up some of them). The town is quirky–like Twin Peaks (without the murder) or Rome, Wisconsin, or Cicely, Alaska–and that adds perfectly to the charm of the book.

This was a total comfort read that I completely enjoyed.  Maybe someday Gale will take us back to Gallows Grove so we can check in with these Ryder and Adam.