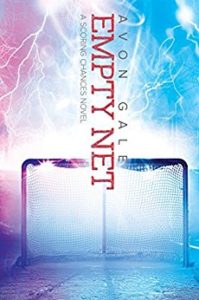 I sprinted right into Empty Net by Avon Gale as soon as I was done with Power Play because Power Play had the first chapter of Empty Net. There was no way I couldn’t take a break between books.

Gale has written some amazing characters in this series who have trouble navigating social situations–Courtnall in Breakaway, Drake in Power Play and now there’s Laurent St. Savoy in Empty Net.

St. Savoy was briefly introduced in Power Play as the evil goalie for the evil Ravens. As Empty Net begins we find that St. Savoy has been traded to the Spitfires. No one is happy about this–except the team’s owner, who we know from Power Play love to stir up drama.

Issac Drake might be the least pleased of everyone. As the Spitfires goalie, he’s not thrilled at suddenly having competition for his starting spot. Plus, St. Savoy and Drake have bad history (which I won’t spoil if you haven’t read Power Play). However, Drake has to step up since he’s the Spitfires captain and get St. Savoy integrated into the team.

It’s not easy because St. Savoy has had a horrible time at the hands of his father. It’s been a life of hearing that he wasn’t good enough, that no one could possibly like him  as well as some violence when he didn’t do as he was told. Of course, Drake’s life growing up wasn’t great either and it actually gives the two some common ground.

Each of them also feels an attraction to the other. St. Savoy doesn’t know what to do with that since he’s been told so often that no one will like him. Drake, on the other hand, isn’t sure he could, or should, pursue a relationship with someone as damaged as St. Savoy is.

Of course, since this is a romance novel, they do make a go for it. Drake is such a hero as he does everything he can to help St. Savoy–first by simply feeling a part of the team to helping him see that he can be loved. St. Savoy, meanwhile, has an amazing internal dialogue as he fights against what he’s been told forever. The ultimate choices he makes are inspiring.

I devoured this book, as I have the others in the series, and it’s all because of how Gale spins the story. I mentioned in the review of Power Play that I felt her storytelling skills were evolving fast as she wrote these books. Empty Net was another terrific leap from Power Play. I know book five is coming soon and she’s writing book six. I’m eagerly looking forward to these future installments.