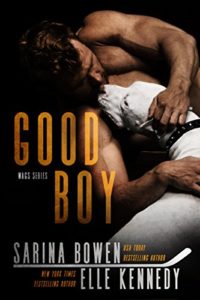 I’m a huge fan of Sarina Bowen and Elle Kennedy’s Him and its sequel Us. It shouldn’t be surprising that I’d pick up the next book that, at least partially, continues Jamie and Wes’ story. Good Boy, focuses primarly on the larger-than-live Blake Riley, who was introduced in Us, and Jess, Jamie’s sister.

For Jamie and Wes fans, this book is a must because (spoiler alert if you’ve not read Him and Us) it contains their wedding. Which is every bit of awesome they deserved, especially for Wes who gets a very nice present from Blake (and this is something I wish could’ve been explored a bit more–but I get why it wasn’t). After the wedding, it’s nice to see the guys settle into married life in Toronto.

As I said though, this isn’t about them. It’s about Blake and Jess and it’s a great read. While Him and Us had some comedic elements (and Us had a lot because of Blake), this is more full out romantic comedy between the two of them. After planning Wesmie’s wedding, she decides event planning isn’t for her. What she focuses is on is how she felt about taking care of Jamie during his illness in Us. Nursing school is her thing and that takes her to Toronto.

The opposites-attract between Blake and Jess is so perfect. She views him as a loud oaf with a giant ego. He views her as a sweet, pretty girl he’d like to bang. As they both smooth each other’s edges a little bit, we learn a lot more about Jess insecurities as well as some events in Blake’s past that are nothing short of shocking but also kind of amazing because of how he handled them. Watching these two come together while also growing as individuals was awesome.

Kudos to Sarina & Elle for extending Wes & Jamie’s universe. Good Boy is the start of a new series of standalone books called WAGS. I suspect I’ll be picking up more of these in the future to keep tabs on the Toronto team.

Also, just for the record, I completely agree with Blake: Glitter totally belongs at a wedding.