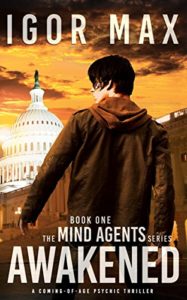 I’m into reading YA thrillers these days (especially since I’m writing a cyber thriller series of my own) and I’m glad Igor Max’s debut novel Awakened: Book One of the Mind Agents Series crossed my path.

The story’s about a group of four young people who are brought to a government facility. Their results on an IQ test show that they’re likely to have psychic powers. For the most part, the kids don’t even know they have these powers until they’re forced to use them to save their lives–and eventually everyone else’s. It seems that they aren’t the first to be studied for abilities. One of the program’s earlier participants has escaped from jail, determined to destroy the world.

Max does a wonderful job of introducing Jack, a typical teenager trying to get through school while taking care of his grandfather. He has no idea what’s going on when he’s abdicated, given no information and tossed together with three other kids: Chris, Maya and Sabine. We also meet the evil Kasym who has a plan to unleash armageddon.

The tension ramps up perfectly as  Jack and his friends discover how to use their powers and exactly what’s at stake. I don’t want to give away too much because Max takes the reader on a fantastic ride in Awakened. I will say the chase through Washington D.C. is thrilling and the book ends tremendously, although with a bit of a cliffhanger. I’m already looking forward to book two, Deceived, which is due out in March (I’m so eager that I’ve already pre-ordered it).