Book Review: “At the Edge of the Universe” by Shaun David Hutchinson 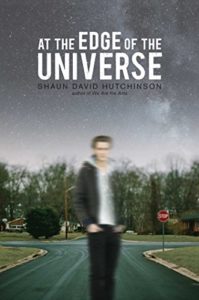 Here’s a book where the cover grabbed me right away. I saw it in the YA section of my local bookstore (yes bookstore, not Amazon) and I had to see what it was about. I was intrigued by the first part of the blurb: “Tommy and Ozzie have been best friends since the second grade, and boyfriends since eighth. They spent countless days dreaming of escaping their small town—and then Tommy vanished. More accurately, he ceased to exist, erased from the minds and memories of everyone who knew him. Everyone except Ozzie.”

That drew me right into At the Edge of the Universe by Shaun David Hutchinson and I had to buy it.

The book is a page turner. What’s happened to Tommy? Why is the entire universe shrinking? Entire galaxies and planets are slipping away. What’s Tommy got to do with that? More importantly, why is Ozzie the only one that knows it’s happening?

Ozzie’s an amazing character as he tries to figure out what’s happening, but he also does normal teenager stuff. He’s got a physics project due. He’s got a best friend whose on the cusp of a music career. There are bullies to deal with. Ozzie’s family is falling apart too as his parents are divorcing.

All these things make you root for Ozzie.

Where it comes to the end, however, and by the end I mean the final three chapters, I’m not actually sure what happened or how I’m supposed to take it. I’ve re-read those chapters to see if I missed something and as far as I can tell I didn’t so it might be that I either don’t understand it or I don’t get it.

Strangely, this doesn’t dampen how much I enjoyed the book. The mystery of what was happening to the universe was intriguing and Ozzie’s every day life also had me engaged. As such, I’d recommend this book. If you read it, and can explain the ending, please let me know.

As an aside, I’ll throw out there that this reminded of a Star Trek: The Next Generation episode where Dr. Crusher ended up trapped in one of Wesley’s science experiments. For her, people were disappearing off the Enterprise and eventually the universe was disappearing too. What I am sure about the ending of this book is that Ozzie wasn’t stuck in a science experiment.