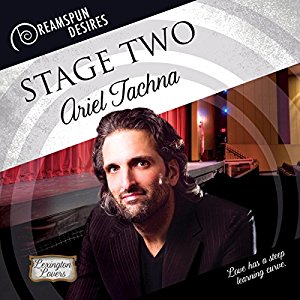 I love Ariel Tachna’s Lexington Lovers series, which is part of the Dreamspun Desires line, and she’s done it again with Stage Two, which is the third book in the series.

In this one, assistant principal Blake Barnes is dealing with the bullying of two new students. He wants to put a stop to it and protect them, but nothing’s been witnessed and that’s a problem. Blake has to get in touch with their guardian, who turns out to be his high school crush, Thane Dalton.

Thane doesn’t recognize Blake at first when he comes in blazing mad that his nephews are being targeted. Thane is just like Blake remembers him–sexy and a hothead. The solution to the problem is to put the nephews on the stage crew for the upcoming school play, which is supervised by Blake. Thane, being the owner of a construction business, ends up helping and that puts Thane and Blake in close proximity for several weeks.

Ariel does a tremendous job of setting of Thane’s bristly attitude and Blake’s caring for his students mixed with us desire for Thane. She also throws in some terrific curve balls for the two. These characters are wonderful, both with the need to make life good for Thane’s nephews, both in and out of school.

I read Stage Two as an audio book, and I loved John Solo’s narration yet again (he also did Matchless Man). He nails the characters perfectly, both adult and kids.

You can check out Will’s review of this book in episode 91 of Jeff & Will’s Big Gay Fiction Podcast or you can listen to Ariel’s recent interview in episode 81 where she talked about Stage Two along with some other recent releases. 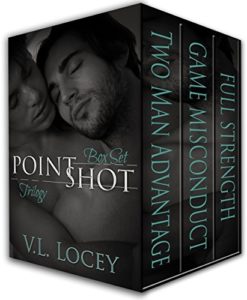 The other book I’ve read involves hockey, which I haven’t read in a while. I picked up V.L. Locey’s Point Shot Trilogy, which is made up of Two Man Advantage, Game Misconduct and Full Strength. I absolutely loved the romance between Victor Kalinski and Dan Arou.

Kalinski is sent down to the Cayuga, New York Cougars after disciplinary issues in Boston. No sooner is he in Cayuga and meeting his new team that he finds an attraction to Arou. The two are absolutely nothing alike. Kalinski is a hulking player, with a temper while Arou is much shorter (a point Kalinski refers to often) and kinder. Arou’s attracted to Kalinski too and the two take off on a wild ride of a romance.

Over the course of the three books, these two go through so much, not the least of which is overcoming what a colossal pain in the ass Kalinski can be because he can have the urge to fight over practically anything. Whereas, Arou rarely gets mad–but boy when he does look out. Locey does a terrific job of turning these guys from bristling against each other to finding the love. Plus she throws some amazing obstacles in their path–as if their very different personalities weren’t enough. I’m not going into the obstacles because the reader deserves the wonder of discovering them. I will say one of the last ones scared me bad because I didn’t see how they were going to come back from it…but, of course, since this is romance they do.