Jeff opens with details on the writing week, which included finishing a short called Head Games and going through the first round of edits for Codename: Winger #1.

Will shows off his groovy Valley of the Dolls inspired shirt from Tom’s Trendy Tees.

The Gay Readers Club is discussed as is the new Provincetown bookstore, East End Books Ptown. Jeff reviews new books from Sarina Bowen & Elle Kennedy as well as Geoffrey Knight while Will reviews Promised Land, a children’s book featuring a farm boy and prince who fall in love.

The guys talk about Where the Bears Are 2 (along with its Kickstarter for season 6) as well as One Million Years BC. They also lament that they’ll miss Sara Bareilles going into the lead role in Broadway’s Waitress.

M.J. O’Shea is here to talk about her latest Dreamspun Desire along with her prolific writing life. 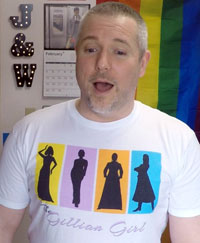 Here are the things we talk about in this episode:

Check Out These Other Episodes:

Special offer for Big Gay Fiction Podcast listeners: Get a Libro.fm 2-month audiobook membership for the price of one month. Click here to sign up today. Best of all, your audiobook purchases support local bookstores.

O: The Oprah Magazine named Big Gay Fiction Podcast in its list of "26 of the Best Book Podcasts to Listen to When You're Not Reading."

Book Riot listed Big Gay Fiction Podcast in its "33 of the Best Book Podcasts for All Genres."

Big Gay Fiction Podcast is part of the Frolic Podcast Network. You can find more outstanding podcasts to subscribe to at Frolic.media/podcasts!