Will and I have had The Storymatic for a few months now and its sat on a shelf unused. That’s changing as we begin our Flash Fiction Friday series, which will happen here and over on Will K Writes.

We’re playing with only slightly modified rules of The Classic Storymatic:
1) Draw two gold cards. Will and I each drew one to make the set.
2) Combine the cards to make on character
3) Draw two copper cards Okay, first, these look like orange, not copper. As with the gold, we each drew one.
4) Let those lead you into the story
5) This is our own rule: If you need additional help finding the story, you can draw one more of either color to add into your story. You have to use what you end up with. The other person doesn’t use the additional card (so if I draw a bonus card, Will can’t use it).

So here are the cards we drew this morning and we have a week to come up with a story to post on our site. 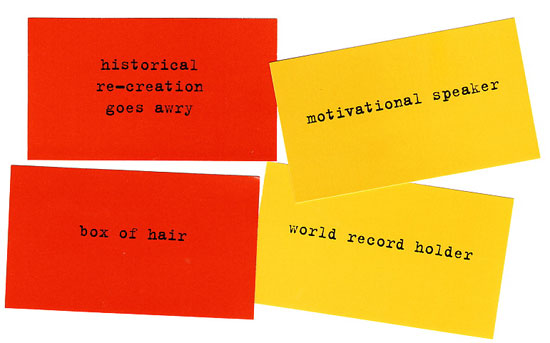 Come back on September 5 to see the story I write with these cards. You can play along too. If you write a story with these prompts, please post in on your blog and leave a link to it in the comments section.

[h3]August 29 Story[/h3]
Here’s the story from the cards drawn last week. This was not an easy one to start with out of the gate for FFF, but it was fun once I had the idea of how to tie all this together. Hope you enjoy!

A Call for Help by Jeff Adams

“I’m not sure I’m the guy who can help you,” said Marcus Wilde as he stood along with three others in the elevator as he headed to his tenth floor office. He didn’t like saying no, but he also didn’t like getting involved where he didn’t think he could offer something helpful. “It’s a bit outside my expertise,” he said, keeping his voice low. He hated hearing other’s calls, and he didn’t want to be that guy either.

“Look, I’ve read your books. I’ve seen you online. I’m sure you can whip my guys into shape so we can put this past weekend behind us and get through the rest of our current bookings before we go on break.”

“Mr., uhm,” Marcus realized he didn’t even have the guy’s name because he’d started talking so fast when Marcus answered.

“Keller, but ust call me Scott. I know it’s last minute,” Scott’s voice took on a pleading that stabbed at Marcus, but didn’t increase his confidence that he could help. “We’ll take a video session if that’s all we can book.”

“Hold on just a moment,” Marcus said as he exited the elevator. “I’m just walking into my office.”

He confidently walked down the hall to his small office. All he needed was space to meet clients if they came to him, a place for his assistant now that the business was big enough that he couldn’t do everything himself and room to plan and write. He pulled his key, unlocked the door and dropped the mail onto Kelly’s desk. He headed on into his office, dropped his backpack on the desk and sat down in the chair before he put the phone back to his ear.

“Okay, Scott. I appreciate that you think I can help your staff, but my expertise is in working with management teams so they can motivate their employees. You’re asking me to motivate your entire staff out of a collective bad experience. I could see working one-on-one with you to empower you to deliver that message, but I’m not sure me addressing all your employees will have the right affect.”

“First off, hearing from you, an Olympian and former world record holder will do a lot. I know your story from the ’88 games. I remember how much you overcame to get to Calgary. You credited your coach with getting your through. It’s the foundation of your talks. Now we need you to be our coach.”

“To extend the coach talk, I usually coach the coaches. It should be you that motivates everyone as the owner of the company.”

“Except I’m lost. I don’t know what needs to be said. We completely did the wrong thing. I started this company five years ago, and we’ve never had a fail like this. What we did would be like if you went to the theater expecting to see Romeo and Juliet and you got Hamlet. It’s as wrong as wrong can be. How do you think people felt expecting to see a battle from the civil war play out and ended up with a renaissance faire. It wasn’t pretty and everyone here is smarting in the aftermath, myself included.”

Marcus had clearly missed more than a name in the early part of the conversation. He should’ve slowed the guy down right away and made him repeat. He knew the staff had a hugely bungled event over the weekend, but he hadn’t caught that it had anything to do with the civil war or a ren faire.

“Yes, I’m sorry. I’m just trying to piece all of this together.”

“See, we specialize in presenting six different reenactments or stagings. We’ve got three civil war battles, plus the Alamo, War of 1812 and a ren faire. Most everything is built from the same component parts, with some different trappings and accessories. We’ve worked hard over the years to make everything as multi-use as possible while remaining historical accurate when it’s used. We take what we need for each gig and then customize to the space we’re given, whether its a large back yard or several acres. It’s worked great until this week when we were supposed to do Battle of Arbor Hill for some history students and teachers. We apologized and apologized, and even tried to wing it with a quick reconfiguration of our stuff, but we still had too much renaissance stuff. And the costuming, let’s not even go into that. We don’t even have all our stuff back because things got a little ugly with the organizers. Our costume mistress is so distressed that she’s missing two boxes of hair that’s she’s worked to create over the past eighteen months.”

As Scott told the story, Marcus looked at the wall across from his desk. Hanging there was a shadowbox with his gold medal from Calgary and an acknowledgment of his world record ski jump. Scott was right, he’d battled hard to get to Calgary, as an alternate no less. He didn’t let the chance escape when he ended up competing for Team USA at the last minute. It was the only Olympics he’d competed in because in ’92 he was injured in qualifying and that time it was career ending.

“Our reputation is tarnished,” Scott continued, distress clear in his voice. “Everyone feels horrible that we loaded the wrong crates. We’re already looking at how to make sure it doesn’t happen again. As far as we can figure when we got back from the previous weekend, where we had two different setups in the field, things got packed wrong after we cleaned everything up. We have five days until we have to go out and do a scaled down Alamo for a family reunion and we’ve got to be on our game. I firmly believe you’re the guy who can get us motivated.”

Marcus slid the phone away from his hear and sighed. He knew his heart was already sold on doing this even though his brain told him it wasn’t going to do anything for the business, especially since he’d have to do this tomorrow so he could still be in Miami for a conference the day after.

“Okay. I’m in. Ten o’clock tomorrow morning. Email me your office location and make sure you’ve got a space for me to address everyone. I’ll work on the speech on the plane and send it to you as soon as I’m done with it. Can you meet me for breakfast in the morning to go over it and talk about the presentation?”

“Yes, of course. Thank you so much. I’ll have a cashier’s check ready for you. How much?”

Marcus did a quick calculation in his head. “One thousand, even.”

There was a few beats of silence on the other end. “Really? That’s not your usual rate.”

“Yes, really. I’ll come your way on the way to a conference I’m already booked for. You’re just covering my expenses. Your clearly passionate about what you do and I can’t imagine you’ve got much margin to allow for my usual fee. However, there will be one thing in exchange.”

“Oh, you got it, Mr. Wilde. I’ll give you some time with our fight choreographer. He’ll take good care of you.”

Marcus hung up the phone and smiled. Tomorrow would be fun with the sword fighting. Marcus had wanted to learn that since he was a kid, but never took the plunge. He just hoped he earned the lessons by finding the right words for the group.